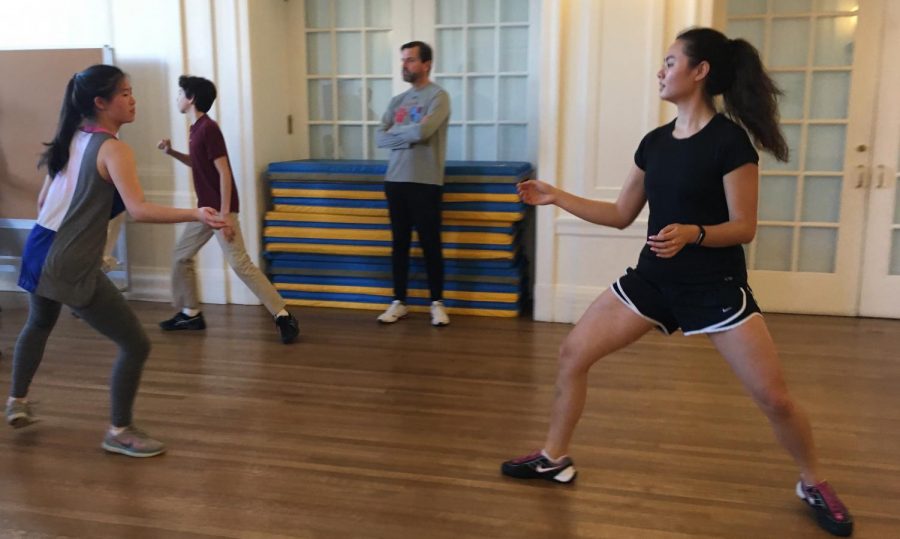 The fencing team practices its footwork during an afternoon practice outside the Little Theater on the Broadway Campus.

While it may only be early February, spring sports athletes are already warmed up with preseason team workouts.

“I expect our kids to be prepared before the season starts,” Anthony Thomas, Head of Athletics & Physical Education said. “Some programs have been having captains’ practices and student-run practices, which is great. I love that type of enthusiasm.”

The soccer team began practicing two weeks ago with preseason workouts twice a week, according to senior Rosie Morford.

“Having preseason practices mentally and physically prepares us,” Morford said. “When the season comes around, everyone is ready to focus, train hard, and is also in good shape.”

The fencing team has created a school club to give both new and returning fencers the opportunity to practice outside of the spring season, according to team co-captain Erika Wong.

“When you don’t fence for a long time, it’s hard to get back into it quickly,” Wong said. “Since our season is so short, it’s helpful for us to practice a little bit during the offseason to keep us in shape.”

Other athletes, such as swimmer Anna Doggett, have been practicing with friends by completing workouts designated by coaches to build certain skills.

“Everyone has been training on their own,” Doggett said. “Claire [Devereux] and I have been training in the pool. Our coach sent us some swim sets in the past that we have been practicing with. The sets practice skills such as breath control and speed.”

Thomas aims to emphasize competitiveness and commitment while getting girls in the habit of staying in shape during their offseasons.

“We need girls committed to working out and having fun while competing at their highest level,” Thomas said.