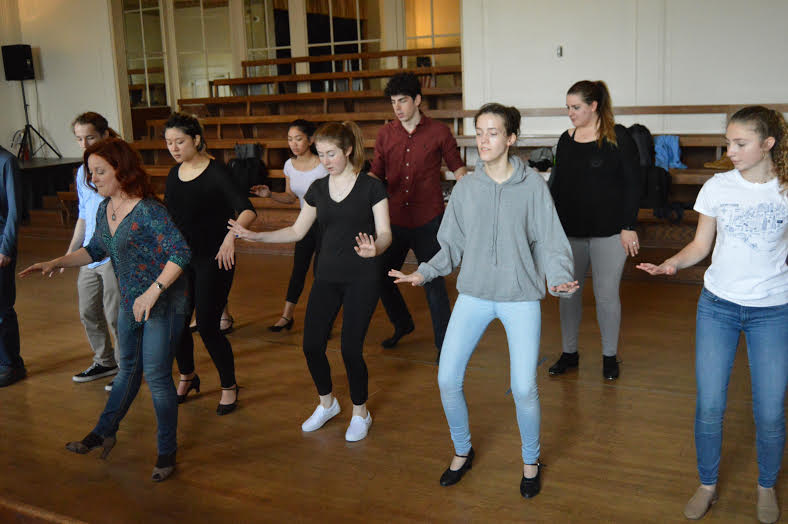 Performers practice one of the many dance numbers for “A Chorus Line.” The musical began in 1975 on Broadway, lasting for over 6,000 productions.

WEB EXCLUSIVE Students in the spring musical are practicing dancing, singing and acting in the Syufy Theatre up to five times a week for the upcoming show, “A Chorus Line.”

Rehearsals for the musical began in January following auditions which took place the previous month. Director Pamela Rickard is currently focusing each rehearsal on either dance, vocal or acting.

“’A Chorus Line’ is very high energy and upbeat show,” Rickard said. “It is a very rigorous dance show as well, so we definitely have a lot of rehearsals that are just dedicated to dance.”

While the musical is a big commitment, it is also a lot of fun, according to junior Delaney Tobin.

“I’m working on the musical five days a week for two hours a day because there is so much to be learned,” Tobin said. “Even though it can be challenging, it’s so much fun to see all of the hard work we’ve already put into this payoff, so the show will be amazing.”

“A Chorus Line,” originally performed on Broadway in the 1970s, is about the lives of dancers and the risks they take to follow their passion, according to Rickard.

“I think everyone should come to this show because not only is it unique and comical, but it’s a theater classic,” Tobin said.

The show will be performed on March 15 to 17, in addition to a preview for both Convent and Stuart Hall on March 12.

“It is such a beautiful story about people following their dreams and overcoming obstacles that happen along the way,” Rickard said. “I feel that that is such a universal message no matter what you do, whether you are a performer or whether you are going into the sciences, there is always something that you are reaching for and disappointments and obstacles that you have to overcome to get what you want.”