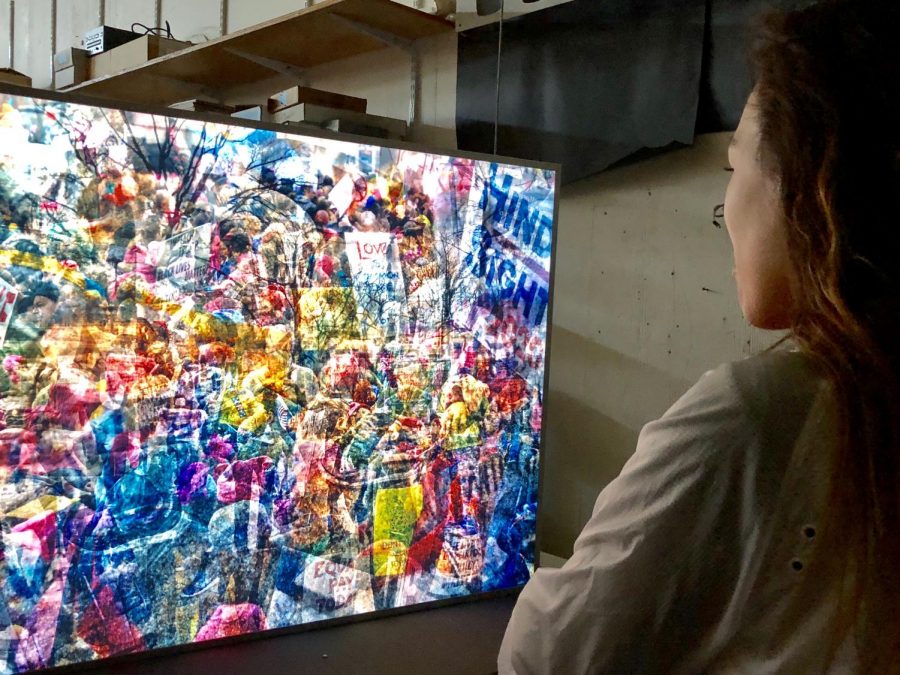 Day El-Wattar views one of Jim Campbell’s pieces made from photos at the 2017 Washington D.C. Women’s March. The work is made up fluorescent lights shining through a layer of 12 different photos from the event.

“For the comparative study, we have to create a 15-slide presentation comparing two different artists and three of their works. Then at the end of that project, we create our own pieces based on what we learned from the artists we were comparing,” junior Anna Doggett said. “The pieces are due next spring, which is good because most students have very ambitious ideas that will take a long time to complete.”

The curriculum encourages students to visit art exhibits and museums in order to introduce themselves to different types of art.

“IB Visual Art is all about giving students first-hand experience to artists and the art world,” Visual Arts Department Chair Rachel McIntire said. “They are given the opportunity to talk to artists and realize that art isn’t just painting and drawing, but is so much larger than that.”

Campbell has a masters degree in electrical engineering from the Massachusetts Institute of Technology and was an engineer in Silicon Valley until 2000. He is now an interactive artist who creates light sculptures with LED lights.

“Campbell’s work is a beautiful example of how art, technology and science intersect,” McIntire said. “It’s basically interactive new media design, and as technology has shifted over the years his work has developed into what it is today.”

Campbell is local in the Bay Area and is currently working on a light sculpture for the New Salesforce Tower which opens in March.

“This light sculpture is going to be on the tallest building west of the Mississippi, and it will be seen — whether or not they want to see it — by around 1 million people per day,” McIntire said. “There will also be four to six cameras around the city capturing videos and displaying them onto the sculpture, creating a live feed of San Francisco.”

The classes were able to visit Campbell’s studio due to junior Haakon Black, who is studying Campbell in his own comparative study.

“I was able to connect with Jim with the help of my mom to ask about the tour and Ms. Mac agreed to let the class go,” Black said. “Campbell is one of the artists I am studying for my comparative study and visiting his studio helped me learn more about his work.”

IB HL Visual Art focuses mainly on this comparative study in tandem with their personal work.,

Analyzing and comparing different styles of art combined with real-world examples of artists and the art worlds helps students to open their minds to the possibilities of what art can be, according to McIntire.

“The other thing about HL is that in the work from this comparative study, you talk about how it inspires and informs the work you’re creating,” McIntire said. “All the students’ in the studio today were in awe of his work. When you see something like that or the Salesforce tower, it opens up this other door of like ‘Wow, I could do that.’”