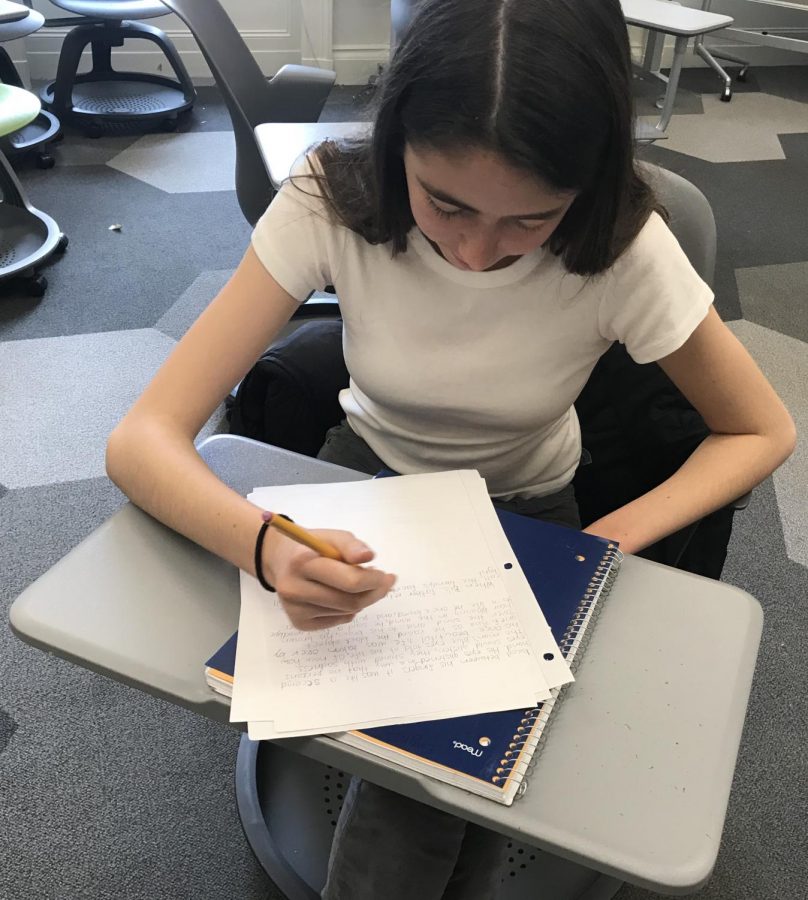 Sophomore Isabella Parmenter hand writes a narrative during the formerly known Kate Chopin Writing Contest. Students were given their entire English periods to respond to the prompt “when everything changed”.

The competition, now called as the Writing Festival, is being redesigned by the English department to include students from Stuart Hall in addition to Convent, according to English teacher Julia Arce.

“We are evolving to not only include the two high schools but eventually all four divisions,” Arce said. “We want to find a more inviting name that not only started within one division of the school but that encompasses all four.”

The Writing Festival has been a part of Convent tradition for almost two decades according to Arce. It was originally started by former English department chair Anne Cromie to celebrate creative writing.

“We have this competition to showcase the excellent student writing in our school,” English teacher Mark Botti said. “It also gives an opportunity for students to explore a more creative writing process that they do not experience in English class every day.”

Students were asked to answer the prompt, “when everything changed”. The competition allows students to both write creatively or about nonfiction experiences while having a narrative and following the prompt according to Botti.

“It was nice to have the opportunity to write in any type of style because it let me write about a personal experience in my life,” freshman Lisel Anderson said. “Since it was my first time in the competition I was a little worried, but when I saw the prompt I knew right away what I wanted to write about. I just went for it and the writing came to me.”

Botti recommended taking a few minutes to brainstorm and make an outline to stay organized during the writing process. He also suggested to free write before writing the final narrative in order to get basic ideas onto paper.

“When it comes to creative writing, I recommend just letting your imagination take control instead of blocking that train of thought,” Botti said. “Sometimes students get scared of what they are writing, but they should just remove that sensor and let the writing come out.”

The English departments at both Convent and Stuart Hall will pick the top eight to 10 narratives from each grade in the first round of judging according to Botti. The second round of judging will be passed onto non-English department teachers, who will choose the top four students from each grade. The number one students of each grade will be sent to an outside judge who will choose the whole school winner.