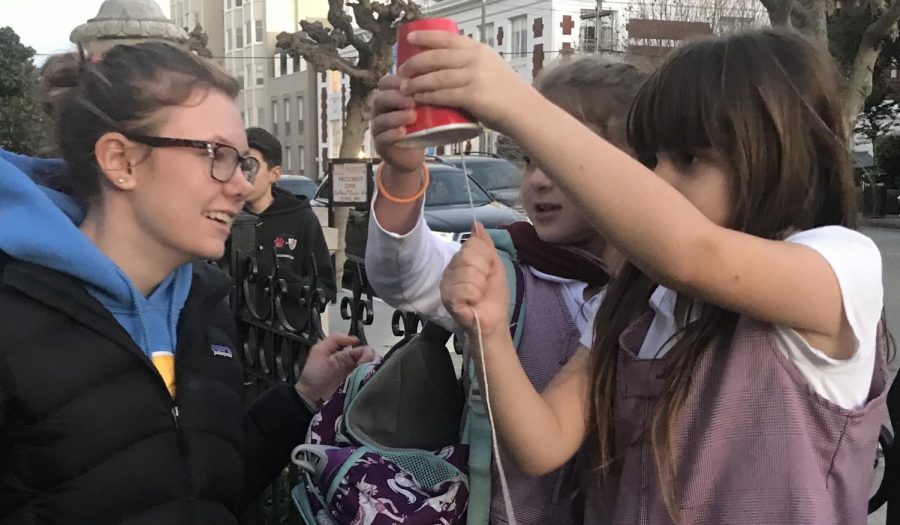 Junior Molly Brown asks two Convent Elementary students to show her how their sound maker works during After School Program. Brown works at ASP every Tuesday after school.

Although having a job during the school year can cause teens to stress over finding a balance with classwork, sports practice and extracurriculars, working on-campus can alleviate some of those issues.

“Over the summer I worked in the tech department as an intern,” senior Jilan Powers said. “I am interested in computer science, and I thought working at school would be a great chance to be exposed to the tech field while in a setting that I was comfortable in.”

“Having the high school staff present adds such a healthy, youthful energy to the program that otherwise doesn’t exist.”

Powers is in the second year of an internship with the tech department.

“We took inventory of new iPads, deployed them to different grade levels and cased them, as well as deploying new Apple TVs,” Powers said about her summer job.

Other on-campus job opportunities include working for the After School Program with Convent Elementary students.

“I started working with kids a couple of years ago when I was a CIT at the Bay Club Camp,” junior Molly Brown, who works for ASP, said. “I realised that working with kids made me really happy. I love interacting with them and helping them learn.”

“We do all sorts of experiments,” Brown said. “Just the other week we did an activity with cockroaches and learned all about them. The week of Halloween we made slime with chemicals.”

Hiring students provides high schoolers with employment opportunities and is convenient as the employees are already on campus for school, according to Auxiliary Program Director Joey Elftmann.

“Having the high school staff present adds such a healthy, youthful energy to the program that otherwise doesn’t exist,” Elftmann said.

Student Life Director Devin DeMartini Cooke sent out an email at the beginning of the school year inviting interested students to apply for ASP. Paid positions are only available when to students over 16 years old, however, interested applicants can also volunteer with the program.

“They are such big role models for the younger kids.” Elftmann said. “The kids naturally look up to them and want to be like them.”