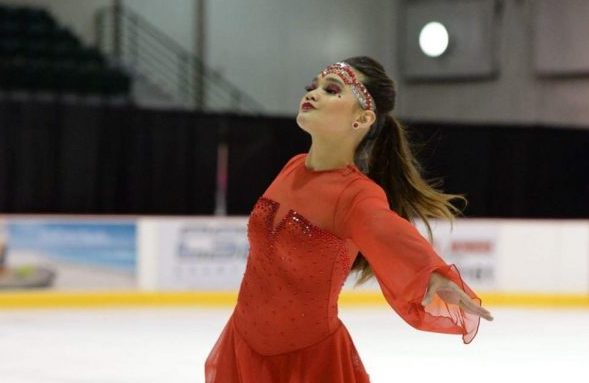 While most of her classmates are still in bed sleeping, senior Gabby Tom rises at 5 a.m. in the East Bay and drives to San Francisco’s Yerba Buena Ice Skating Rink to practice her double jumps, camel spins, and death drop spins, for an hour and a half.

Tom practices three times a week in the morning with San Francisco Ice Theatre and on the weekends at the Ice Center San Mateo.

“Gabby is an extremely hard worker and at practices she contributes absolute focus, serves as a leader for others to follow, and puts forward her best effort,” teammate Maya Schwartz said. “She is also the least likely to complain about how incredibly early practice is.”

At the age of 5, Tom began ballet lessons at San Francisco Ballet School. She started ice skating lessons at the same time, but dropped ballet at age 9 and began skating competitively at age 13.

“Gabby is highly committed and one of the busiest figure skaters in the Bay Area,” her father Gary Tom said. “She was part of two medal-winning skating teams and has ice skated at numerous competitions, championships and ice shows with multiple television appearances. I have been to all the competitions and filmed all of them.”

Tom skated with the Silver Stars Synchronized Skating Team at the Dublin Iceland Ice Skating Rink up until this year, when the team disbanded due to lack of skaters.

“I am sad that I can no longer skate with the synchronized skating team,” Tom said, “though it has allowed me to focus more on school.”

Tom balances a rigorous practice and competition schedule with six classes including four Advanced Placement courses. In addition to local competitions and ice shows such as the Union Square Ice Rink Opening and Tree and Building Lightings at Embarcadero Center, Tom’s team also competes across the United States multiple times during the school year, requiring her to miss school.

Tom meets with teachers ahead of time and remains on top of her studies, according to Gary Tom.

“Skating has had to take priority over many things in our lives, including school,” teammate Jessica Zhang said. “Even though we practice a lot and work very hard collectively, it’s my teammates like Gabby — who truly love the sport — that make skating fun and worthwhile.”

Tom says she plans to continue ice skating through her Senior Year and hopes to skate at the collegiate level individually or as part of a team.

Tom’s next competition is the Theatre on Ice Nationals in Geneva, Illinois, in June as part of the San Francisco Ice Theater team.

“I have competitions all over the country, which are all incredible experiences,” Tom said, “but the people I have met on my teams, some of whom are now my best friends, is my favorite part of ice skating.”