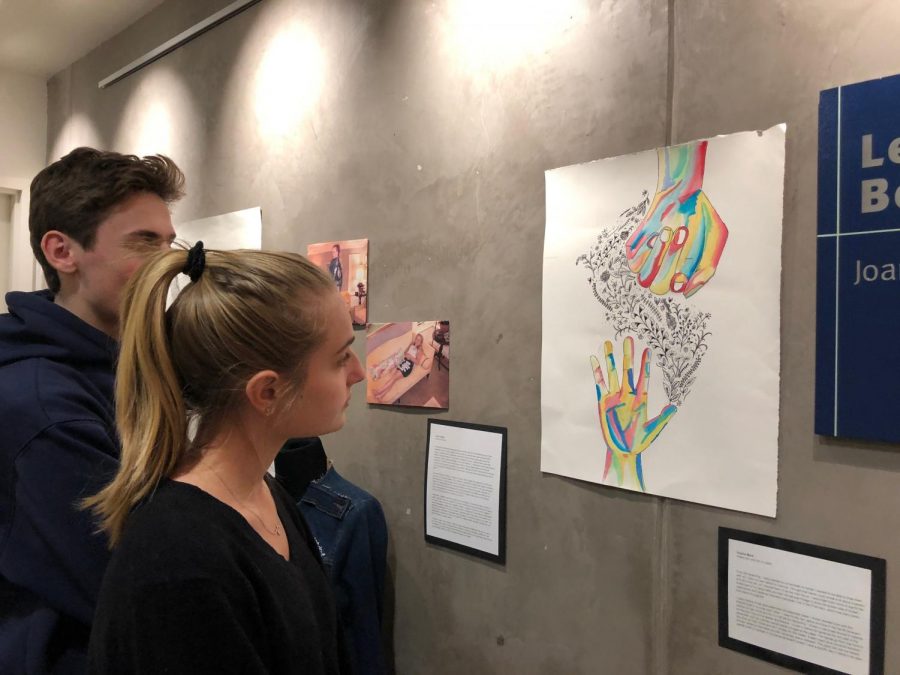 Maggie Walter views Sophie Mack’s piece at the opening reception. The artwork will be showcased in the Syufy Gallery, which was renovated a couple of years ago.

Junior and senior art work will be displayed for the next two weeks in the Syufy Gallery, after months of work in International Baccalaureate art classes.

As a part of the theme “We are all a work in progress,” students each created two separate pieces, with one reflecting their personal identity. The other is a part of the Memory Project in which students received a photo of a child in Russia, Syria, Afghanistan, the Philippines, Haiti or Mexico and drew a portrait of that child.

“This was incredible to watch, to watch our students take such concern and the intimacy of it,” Fine Arts department chair Rachel McIntire said. “They are strangers, but by the end of it even though they did not talk to them or know them personally, they said “oh are they going to know who I am?” so they shared a photo and something about themselves.”

Students may visit the the gallery anytime through Dec. 20, according to McIntire.

“As someone who doesn’t take art, it is going to be a really interesting opportunity to see what everyone has been working on,” junior Poppy Cohen said.

After working on their pieces since the beginning of the year, students anticipate the showcase of their work beginning tonight at the opening reception, according to junior Sophie Mack.

“I’m excited but also nervous,” Mack said. “It’s nerve-racking to have other people look at a piece you’ve created and try to decipher what it means.”

Pictures of students working along with their work will be shared internationally with UNICEF and IBUSA, according to McIntire.

“The culminating event of IB is to share your work with your community,” McIntire said. “I think it is really important to practice that early on. It is so nice to see the families and friends of our community come in and see the excitement from students from how proud they are of their explorations.”