Students volunteer during the Christmas season 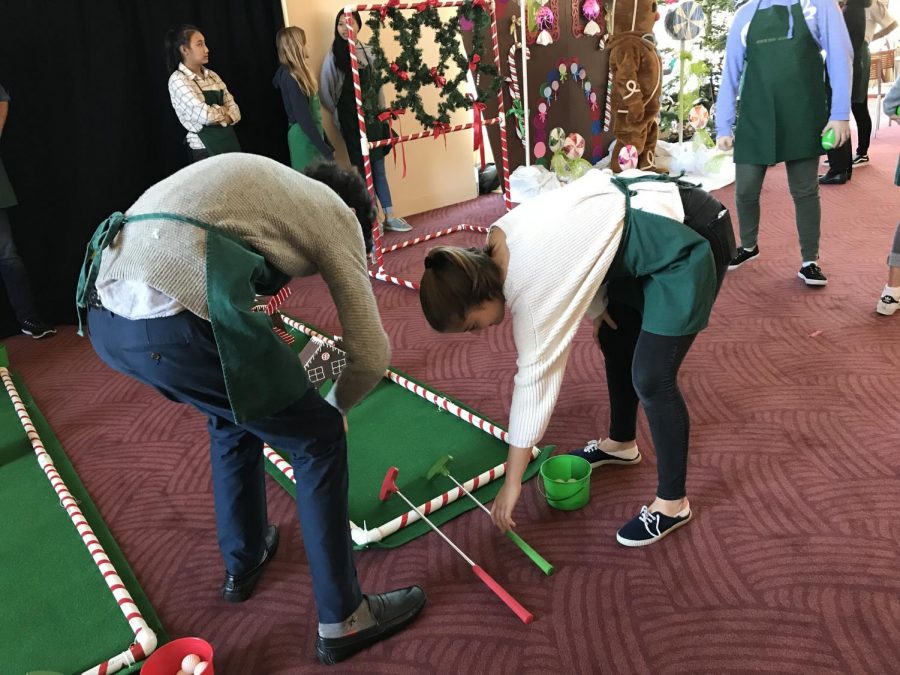 Sophomores Sofia Telfer and Henry Sears set up a game of miniature golf prior to the arrival of children at ‘Deck the Hall’. ‘Deck the Hall’ is an annual event hosted by Davies Symphony Hall, which includes games, photos with Santa and a concert.

WEB EXCLUSIVE This past weekend, numerous students from both high schools paused their finals preparation and volunteered at holiday-themed events across the city.

Throughout November, students received emails regarding multiple volunteering opportunities across the city. Two of those events, ‘Deck the Hall’ and ‘Christmas on Broadway’, took place this past weekend. Many of those emails were sent by Stuart Hall Service Learning Director Ray O’Connor

“[The holidays] are a natural time for a lot of people to volunteer,” O’Connor said. “People’s lives are busy, even students, given the studies, sports, and extracurriculars that many students fill their calendars with. So, for Thanksgiving, Christmas and Easter, we have naturally built into the school schedule time for students and families to give back.”

With finals two weeks away, many students spent the past weekend studying and preparing in advance of their exams, but many felt the need to continue their contribution to the community.

“It’s a very busy time of year, with finals and Christmas at almost the same time, but that doesn’t at all affect the constant needs of our community,” sophomore Nyxa Aquino-Thomas said. “I think that dedicating our time to our community is just as important as studying for a test. If anything, volunteering is a more selfless act.”

“When we have such a supportive community, why not share its support with other communities? ” sophomore Kate Hindley, who volunteered at both ‘Deck the Halls’ and Christmas on Broadway’, said. “Also, volunteering at these kinds of events is an opportunity to hang out with my friends outside of a classroom setting, and that’s refreshing as we get closer to finals.”

Although no other formal volunteering events are still scheduled for December, Students in Action, SIA, is hosting a toy drive with a tentative ending Wednesday, Dec. 6.