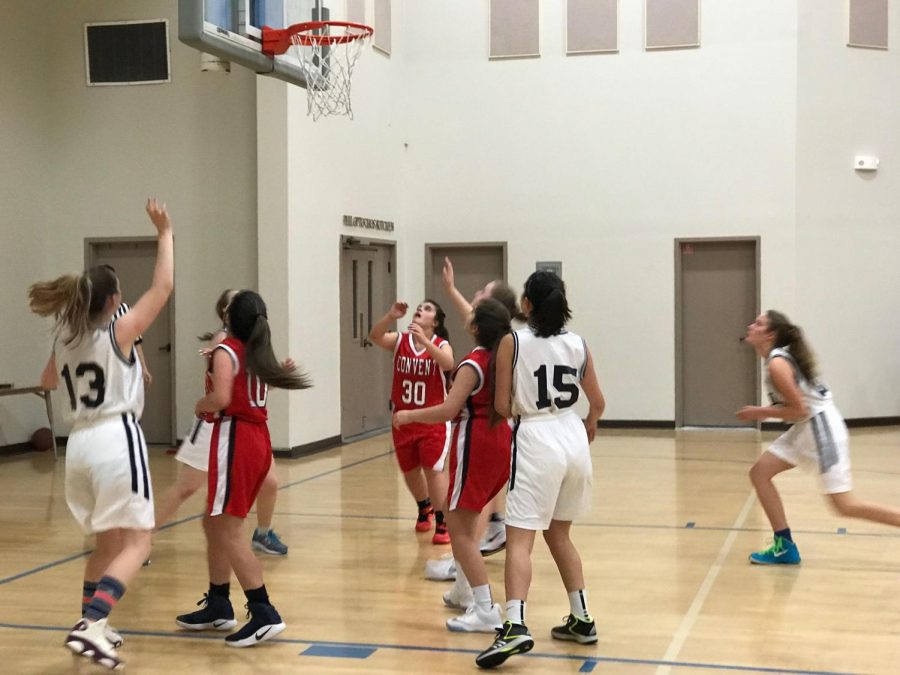 The JV basketball team defends Waldorf during the second quarter of the game. The quarter ended with Cubs up 8-6, but the game ended with a Convent loss of 23-15.

“During the game, we got really competitive,” freshman Sarah Barnes said. “Even the littlest things like counting down the shot clock helped us become more engaged and energetic.”

Basketball practices started in November, and teams have been practicing every day in preparation for the first game.

“The girls have been running through drills and working on their defense,” Athletic Director Elena DeSantis said. “They’ve done a lot in the last month to get ready for this game.”

Though the teams are very new, teammates are supportive of one another and work well together, according to Barnes.

“On the court, we play to win,” Barnes said. “Every player is included in the team and we consistently support each other.”

Tryouts were held at the beginning of the month for all grade levels, and after the girls were divided into varsity and JV teams.

“JV is only eight people which is much smaller than last year,” sophomore Malinalli Cervantes said. “It’s harder because we all have to be on the court all the time, but it’s easier to build a sense of teamwork because you have a closer connection to your teammates.”

The JV team will play next in the Tamalpais Tournament at Novato High School on Dec. 7, and the first varsity game is at the Marin Academy Tournament at San Domenico School on Nov. 30.