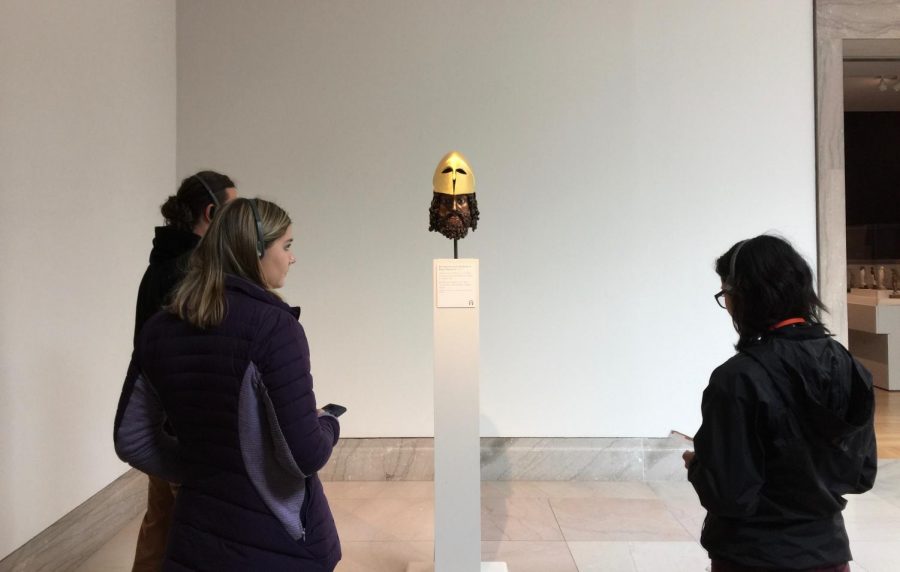 Sophomore Brooke Wilson listens to head set and looks at a replicated ancient sculpture during the Latin III Honors visit to the Legion of Honor Museum. Students had learned about polychromy and the science behind the colors prior to the trip.

WEB EXCLUSIVE  Latin III Honors students visited the Legion of Honor Museum today as part of a unit on polychromy in ancient Greece and Rome.

“The purpose of the field trip was to show students that ancient sculptures were originally done in color,” Latin teacher David Jacobson said. “Studies involving infrared and ultraviolet light have shown that there were colors hidden within the pure white marble, which had been scrubbed away, that the naked eye could not detect.”

Many of the sculptures recreated and displayed in the exhibit were buried underground, causing the paint to fade over time. When the sculptures were dug up during the Renaissance, they appeared white so artists began to replicate them in white marble, according to sophomore Brooke Wilson.

“It is really important to see the ancient world in color and recognize that it was in fact not the pure white which people typically think of,” Wilson said. “I had never before in person seen painted sculptures from the ancient world so I was really excited to see that.”

Students read and presented articles about polychromy and the techniques used to detect colors in the ancient sculptures leading up to the field trip, according to sophomore Dena Silver.

“I’m a museum geek, so I was most excited to see these discoveries and imagine how the sculptures would look in paint,” Silver said. “Though, I also think that the science behind polychromy is fascinating, and I was excited to learn more since it aligned with what I’m currently learning in chemistry about the electromagnetic spectrum.”

The unit will end with an art project inspired by the exhibit and lessons in class about polychromy.