'The Crucible' cast brews up spectacle. 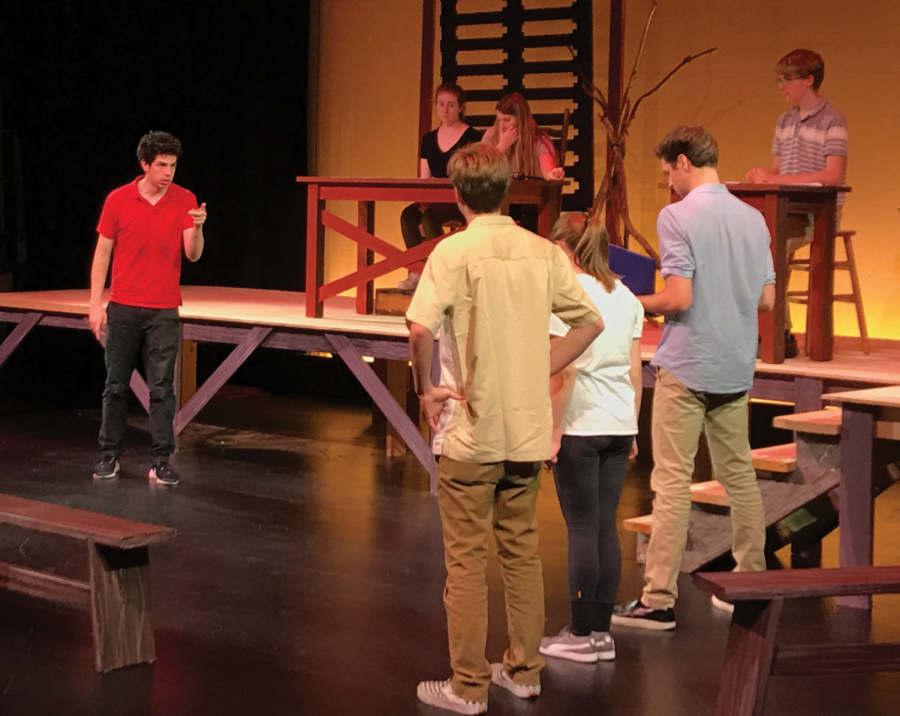 "The Crucible" cast performs Act 2, Scene 2 during a rehearsal. The play opens Nov. 9.

With pastel lights and a few bone-chilling screams, Convent & Stuart Hall’s fall production of Arthur Miller’s “The Crucible” will set the stage of Syufy Theatre to 17th century Salem, Massachusetts.

The 1953 play dramatizes the Salem Witch Trials, which prosecutes people accusing and convicting each other of witchcraft. The trials show the results of envy and dissolution in Salem, according to English teacher Julia Arce, who teaches “The Crucible” in her junior English class.

“We are aiming to get the feel of old Salem,” stage manager Kelly Rosanelli said. “With the staging [of the play], we are really trying to show what went on [during the trials] since there are so many layers to the story.”

The crew uses pastel colors to convey the traditional feel of Salem, according to junior Darrean Loy, who plays landowner Thomas Putman and slave Titiba. The different lights and staging will reflect the mood in each scene.

“We are using the lighting and staging to visibly show the emotions that are happening in the scene,” Rosanelli said. “In one scene there is a couple that is not happy in their relationship so we have them on separate sides of a long table to distance them.”

The play exposes ideological fanaticism and puts significant pressure on those who show dissent from authority, according to Arce.

“Sadly ‘The Crucible’ is a very timely play,” Arce said. “It [illuminates] this time in our culture where there is seemingly a lack of trust of authority or leadership, and there seems to be a lot of chaos surrounding what is true and what is not.”

Characters in the play struggle with the concept of truth and formulating their own opinions when power figures constantly inflict their beliefs on society, according to senior Mary Crawford, who plays servant Mercy Lewis.

“‘The Crucible’ is a cautionary tale about a society that does not know how to talk about differences of opinions, that does not have an outlet for forgiveness and ends up hanging its own people,” Arce said.

Although the play is set in 1692, the play alludes to the attacks on alleged communists in 1950s America under McCarthyism, a campaign instituted by Senator Joseph McCarthy to blacklist socialist sympathizers but ultimately resulted in unfounded prosecutions and subsequent convictions of innocent people.

“The entire original play was essentially written as an allegory for McCarthyism,” Rosanelli said. “The show describes how society falls apart when people start accusing each other.”

Understanding history from a dramatic point of view allows both the actors and the audience to deeply connect with the historical content, according to director Pamela Rickard.

“The historical circumstances in the play really have touched a nerve in all of the actors and they all really identify with it,” Rickard said. “They are really understanding a piece of history in a very powerful way.”

The play has the structure of a traditional, almost Shakespearean play, with modern aspects and social critique built in as well, according to senior Devin King-Roberts, who plays Reverend Hales.

“I resisted picking ‘The Crucible’ for a really long time since every high school performs it,” Rickard said. “But then, when I read it again I realized how perfect, relevant and powerful this play is. I hope we can bring something new and exciting to it.”