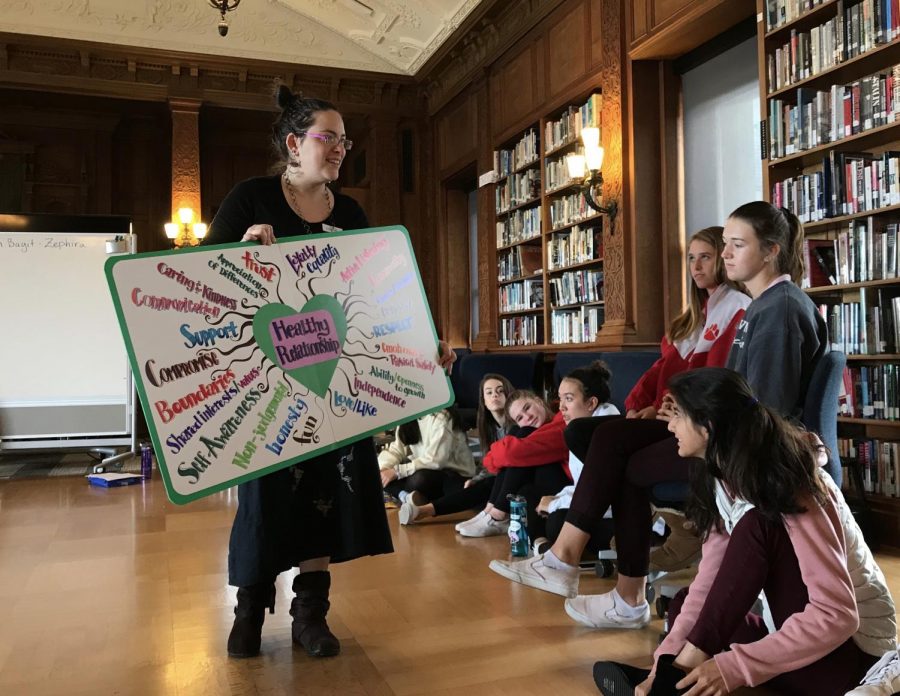 Sophomores read off a map of common qualities that people want in healthy relationships. The map was designed by a Trader Joe’s graphic artist.

WEB EXCLUSIVE The sophomore class learned about healthy relationships and the prevention of domestic violence and sexual assault during Class Meetings this morning.

The Youth Program manager Zephira Derblich-Milea at Shalom Bayit, has been teaching for over 13 years and has brought awareness to domestic violence and sexual assault to discuss in classrooms.

“I was at San Francisco City college studying to become a homicide detective and I took a class called the Politics of Sexual Violence,” Derblich-Milea said. “Through that class I got really angry about the world and how many people are affected by sexaul assault and domsetic violcence.”

As an activity, each of the students listed five qualities that are key to them in a healthy relationship. In the past, Derblich-Milea asked all sorts of people ranging from asked eight-year olds to 90-year old women what qualities they must have in their relationships. She compared the students’ qualities from the results from other people to show how much they had in common.

“I think it was really insightful, and it showed the right and healthy way to end and build certain relationships,” sophomore Julianna Ovalle said. “It was also nice that another person came to talk about this and see an outside perspective of friendships in high school.”

The sophomores were taught about other elements of relationships such as boundaries and when the right time is to address a conflict. They were given the ‘7 Steps to Healing’ to break up the process when you or someone else is in a situation that needs to be solved.

“My favorite question is how do I feel about myself when I’m with this person?” Derblich-Milea said. “I find that question can help for people to recognize if a relationship is supporting us or if it’s actually not supporting us.”