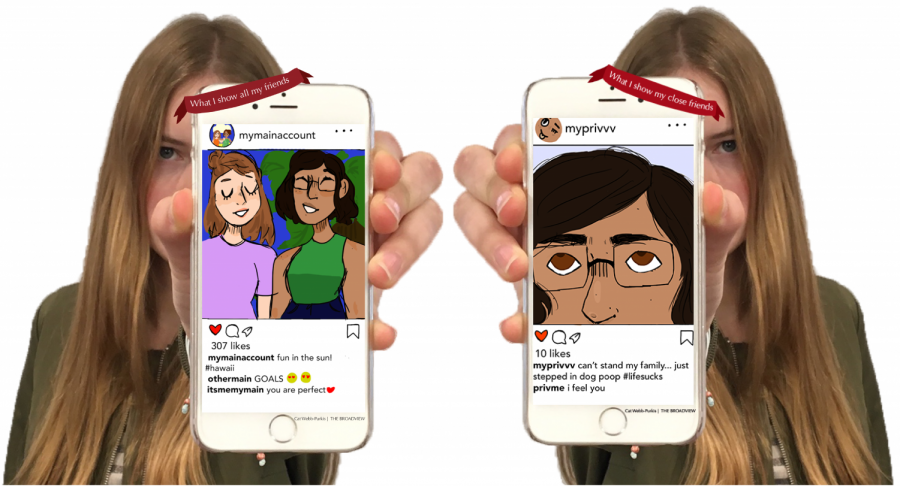 Private Instagrams, secondary accounts usually followed by close friends, have become a common place for students to share unfiltered thoughts and photos to a more limited number of followers. Usernames often make parodies or puns of the owner’s name.

“To me it’s not about the pictures — I normally use it for the caption,” sophomore Colette Hom, who uses her private about once a week, said. “I post funny stories or something that’s happening in my life just to update my friends.”

Both main accounts and privates are often set to private mode, a setting that allows users to regulate who follows and sees their accounts, with secondary accounts generally having fewer followers. With 79 followers on her private and over 1,000 on her main, Hom says she notices a difference in the ways she portrays herself on each account.

“The photos on my main are just a little bit more posed, and I put filters on them,” Hom said. “You can’t really see my personality even though I try to post pictures of me smiling. On my private, you see a lot more of my emotions and the way my friends see me.”

Junior Elizabeth O’Boyle, who runs a private with 63 followers, says she does not care about what she posts because only her friends are meant to see it.

“It’s not about quality and showing off like a main Instagram,” O’Boyle said. “On my private I feel comfortable showing stuff I would be embarrassed about if it was to strangers.”

While many students feel comfortable revealing themselves to a fewer number of followers, others take advantage of the privacy to bully. A student who asked to remain anonymous said that she has used her private account to say jokingly mean things to her friends that she would not say through her main.

“I usually only cyberbully my friends,” the student said. “It’s joking bullying, but I say things that if taken out of context would be considered mean.”

The student says she would not comment these things through her main.

“If someone sees [student’s name] commented ‘loser’ on someone’s photo, they’d think, ‘Why is she so mean?’” the student said. “But when they see a username that doesn’t make any sense say ‘loser,’ they think it’s probably an inside joke.”

Hom says she has seen mean comments on private accounts, and she says bullying often occurs when people post about drama.

School counselor Annie Egan recommends that students who see online bullying should direct message the bully to take the post down or reach out to the victim to make her feel less isolated.

“The challenge of a private Instagram is that it feels like it’s not real,” Egan said. “There is a distance between you and that other person you’re hurting.”

The responses people receive to their posts and comments influences what they share on their different accounts, according to John McQuaid, Vice Chair for Adult Psychology at University of California San Francisco.

“If you are sharing something very personal on a public setting, and it gets attacked and criticized, that’s going to shape how likely you are to share that stuff on that setting in the future,” McQuaid said. “Similarly, if you share something with a set of personal friends and they’re much more supportive and reinforcing, that’s going to shape what sort of information you share to a personal group.”

Social media users generally seek support, reinforcement and validation in relationships, which translates into how they portray themselves on social media, according to McQuaid. O’Boyle says she seeks similar support on her private.

“When bad things happen, like if I think I flunked a test, I can complain about it and get support from my friends,” O’Boyle said.

Many students, such as O’Boyle, began their private Instagrams to comment on and follow their friends’ privates. Hom says she got hers in eighth grade because privates were becoming increasingly popular among her friends.

“At first I thought this was one of those trends that would die out,” Hom said, “but then it didn’t, and ever since I’ve just always had it.”

McQuaid says he suspects that the private Instagram trend will continue.

“Having that sort of control over who interacts with you provides more safety in a private account,” McQuaid said. “Folks are going to take more advantage of that.”