Following in the footsteps of school’s founder 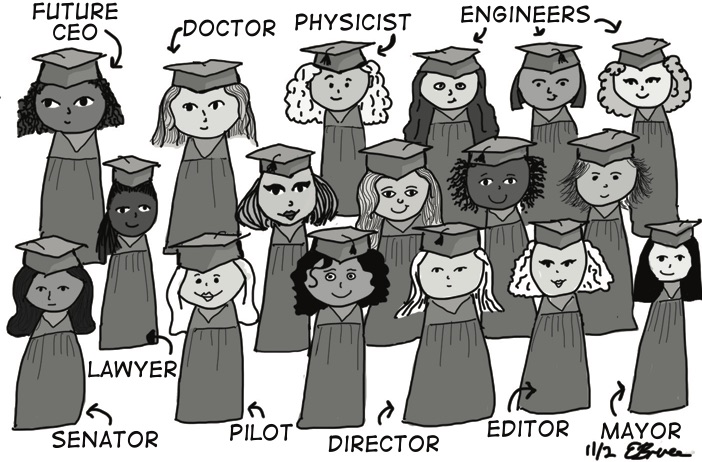 When St. Madeline Sophie Barat founded the Society of the Sacred Heart in 1801, she proclaimed her mission to teach young girls in a world where gender parity in education was non-existent.

Her efforts and the work of others have made huge steps in progressing equality for women today, but female education is still a global issue.

Equal access to education for girls and boys is present in only about 40 percent of countries, according to the United Nations Educational, Scientific, and Cultural Organization. Though this division may not be as apparent in a country like the United States, the fact remains that a majority of the world still does not offer the same possibilities to young women as they do to young men.

Changemakers and advocates are actively pushing for females, especially young girls, to have full access to the same quality of education as boys.

Pakistani activist Malala Yousafzai is one of many fighting for the cause now. In October of 2013, Malala founded the Malala Fund with the aim of giving more young girls across the globe access to education and promoting gender equality.

At just 18, Malala won the Nobel Peace Prize for her dedication to the campaign and successful change in the international approach to education for girls. Like Barat did, Malala devotes her life to making change and has made major strides in girls education.

Although Convent & Stuart Hall is made up both single-sex and coed classes and activities, the school still continues Barat’s vision of equal opportunity over 200 years later.

Whether it be the strictly all-girls English department or coed Advanced Placement higher level classes, the emphasis on successful girls is everpresent. The community of teachers and faculty challenge all students to strive for their highest potential regardless of their gender.

With the social movements of people like Malala, more girls have begun to gain access to an education closer to the kind Convent offers. High quality education grants girls wide opportunities later in life. Girls who graduate from single-sex schools have higher career aspirations in general and thus reach elevated positions later in life, according to the author of “Sex Roles: A Journal of Research” Cary M. Watson, which points to the benefit of a place like Convent.

The school’s goal to provide equal opportunities is so strong that the priority extends much farther past the classroom and into all personal passions. Last year, when four Convent girls had an interest in wrestling, the traditionally all-boys program at Stuart Hall openly accepted them, demonstrating exactly how the Convent & Stuart Hall community is in active pursuit of equal opportunities for all.

As a school that prides itself in offering single-sex education in a coed environment, Convent & Stuart Hall has managed to find a balance of not only instilling intellect in young women, but in fostering and encouraging the growth of all individuals in their pursuits past high school.