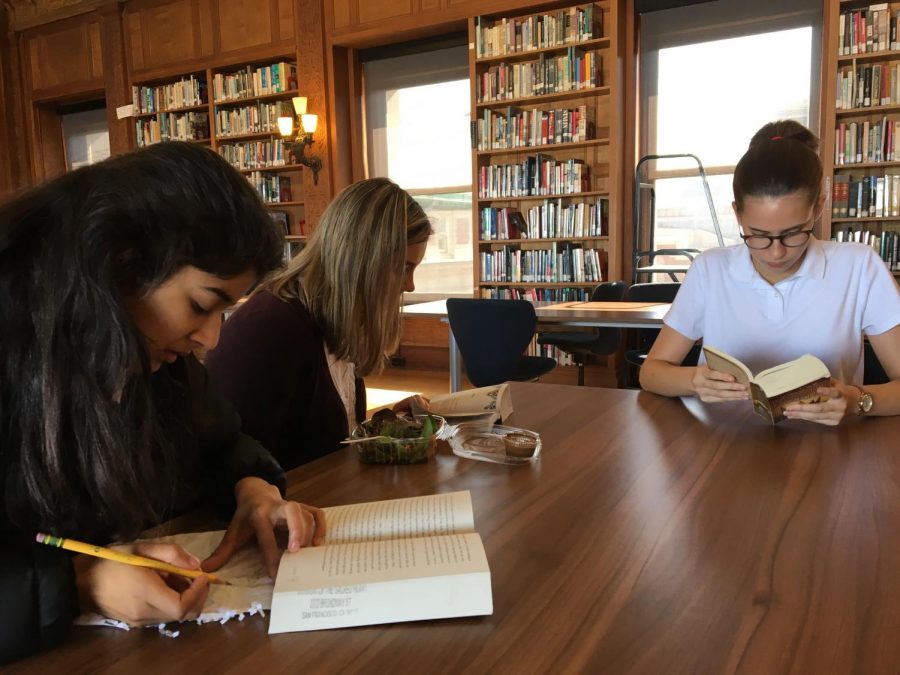 Sophomores Alisha Kalra, Brooke Wilson and Arlena Jackson read in the Mother Williams Library during a book club meeting. The club meets every other Wednesday during lunch.

WEB EXCLUSIVE Book club gathered in the Mother Williams Library today during lunch for some recreational reading as they ate.

“A lot of students are pressed for time,” librarian Alyson Barrett-Ryan, supervisor of the club, said. “We thought a lunch meeting would be perfect for people to pursue their leisure reading during the school day.”

The club meets every other Wednesday in the Mother Williams Library during lunch. Sophomore Gabby Vulakh created the club this year to give students the space and time to read and discuss books of their choosing, according to Barrett-Ryan.

“I like to have time to read during the day — it’s peaceful,” sophomore Brooke Wilson said. “I don’t get to read as much during the school week for leisure, so this is a good time to do it.”

Each month, the club chooses a recommended book to read — this month’s being “Forbidden” by Tabitha Suzuma — although members can read any book they want. Sophomore Arlena Jackson chose to read “A Clash of Kings” by George R. R. Martin.

“I joined book club because I really like to read, and it’s a good break from school to do a peaceful activity that I enjoy,” Jackson said. “I like to get lost in a life that’s not mine.”

Leisure reading has many benefits, such as increasing empathy and exercising many parts of the brain, according to Barrett-Ryan, who got her information from “Tales of Literacy for the 21st Century” by Maryanne Wolf.

The group gets to experience getting lost in a book, a sensation that not everyone experiences, according to Barrett-Ryan.

“I, as a librarian, would love for every student to engage in that at least once in their time at Convent,” Barrett-Ryan said. “To me, the book club is the start of that.”