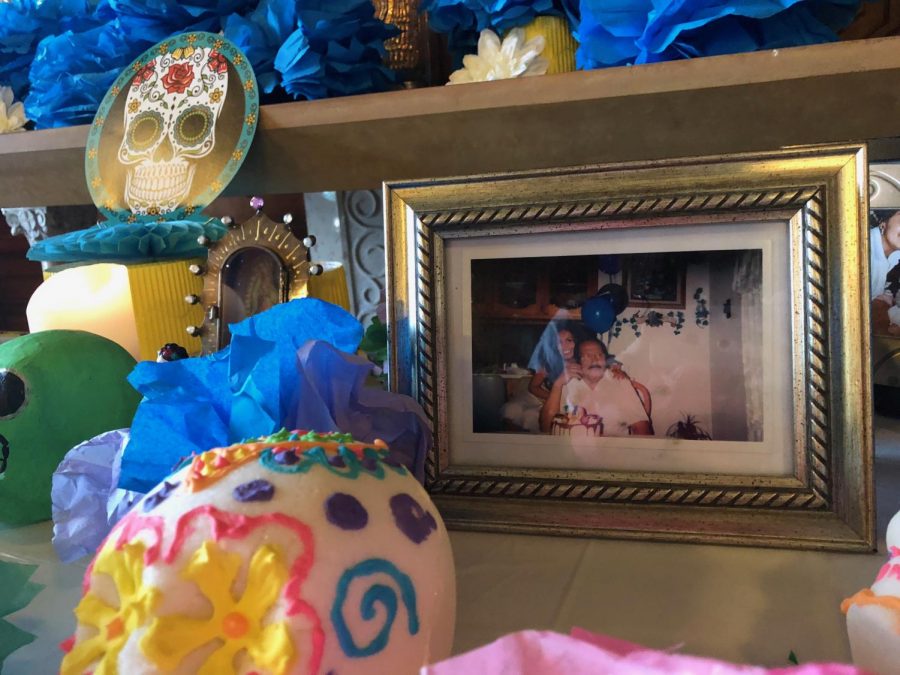 Sophomore Malinali Cervantes leaves a photo of her deceased grandfather on the Dia de los Muertos altar in the chapel. Students and faculty were invited to place an item on the altar in remembrance of loved ones that have died.

“It’s important to always stay connected to the people that we love; be it those who are alive or those who are dead,” history teacher Michael Stafford said. “[Our loved ones] may have moved on, but they still have made an impact on our lives, and it is important to honor their lives”

Dia de los Muertos is a Mexican holiday celebrated primarily in Central and Southern Mexico that centers on the lives of those of whom have died. Due to the high population of Mexicans, the United States is another primary place that celebrates this holiday.

“It’s important to honor the various traditions that we have here at Convent, including the Mexican traditions, that a lot of members of our community celebrate,” Stafford said.

Numerous members of the Convent community are of Mexican descent, and with Halloween festivities occupying Tuesday’s schedule, POCSU members utilized chapel time to celebrate the holiday with the school community.

“Coming from a Mexican household, Dia de los Muertos has always been a part of my life, but when I leave the house, I felt that the holiday was underappreciated by American society,” POCSU founder Malinali Cervantez said. “Also, with Mexican people being people of color, it worked out perfectly for us to promote our message of cultural inclusion and celebrate a holiday with my school that is very dear to me.”

Dia de los Muertos is officially from Oct. 31 to Nov. 2, overlapping with Halloween on Tuesday and All Saints’ Day on Wednesday.

Although Halloween and All Saints’ Day are important holidays in the Convent community, freshman Harriet Ritchie reminds herself to not let the business of the American holiday season to overshadow the importance of other cultural celebrations.

“I have lived in a diverse community all my life, and I have been raised knowing how important it is to embrace other cultures,” Ritchie said. “After all, those different cultures are what make our community so special.”