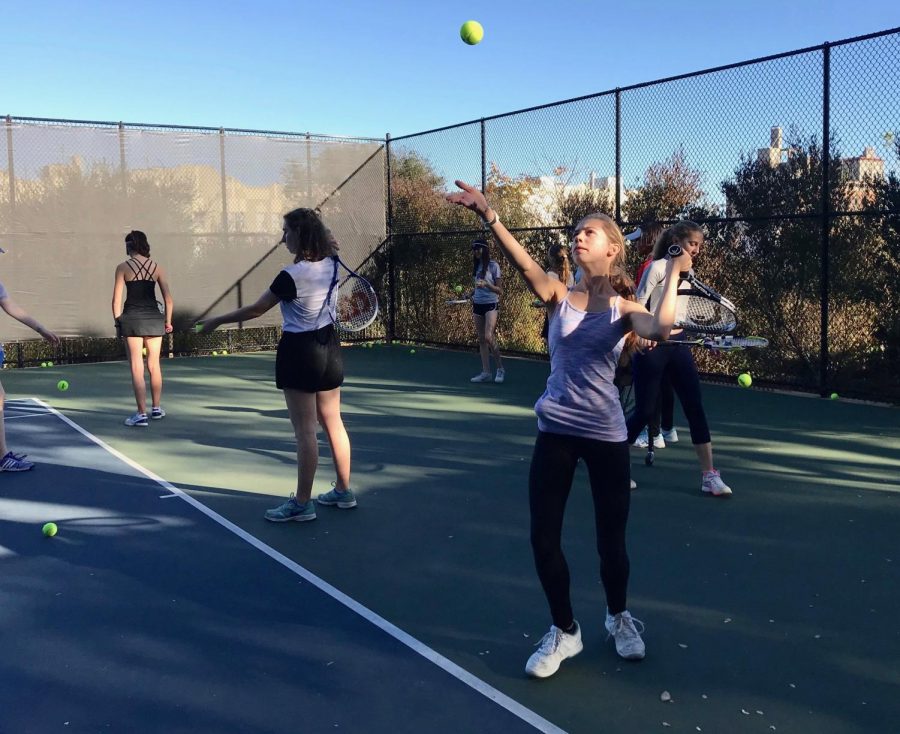 Sophomore Zoe Hinks serves during a JV tennis practice at Lafayette Park. The JV team has only two more practices up until the JV Jamboree, which will conclude their season.

WEB EXCLUSIVE  After numerous matches were postponed due to the unsafe air quality caused by the fires in Northern California, the varsity and JV tennis seasons begin to come to a close.

“I’m really going to miss tennis,” sophomore Kate Hindley said. “Other than soccer, tennis is my only sport, and I have made a lot of good friends that I don’t have any classes with. It’s kind of bittersweet.”

Both seasons began on the Aug. 14 with a week of tryouts and teams formed by the Wednesday of the following week. Although they have different playing schedules, both teams were affected by the fires similarly.

“With tennis being an outdoor sport, we could not practice for almost two weeks because of the poor air quality,” sophomore JV tennis player Michelle Wang said. “We did some conditioning, but other than that, we had to delay many games. It was annoying because it threw off our schedule, but on the other hand, it gave us more time to bond as a team.”

JV will conclude its season this Thursday with JV Jamboree, an event where the JV tennis teams of local private schools compete in a tournament-style battle. The varsity season’s end date is tentative, all depending on Tuesday’s match.

“If we win this Tuesday, we will move on to the playoffs,” Hindley said. “So it’s really important for us to push ourselves and advance as much as we can.”

Numerous players on both teams plan on playing basketball in the winter. Those who focus on tennis as their primary sports plan on cross-training.

“I have been playing tennis for five years, so after the season ends, I train as much as I can,” sophomore Isabella Parmenter said. “I am a part of a tennis club and I try to get on the courts as much as possible.”

The JV Jamboree will be on Thursday at 1:00 p.m. at Golden Gate Park. The varsity playoffs first round match will be on Tuesday at 3:30 p.m.  at a location later to be determined.