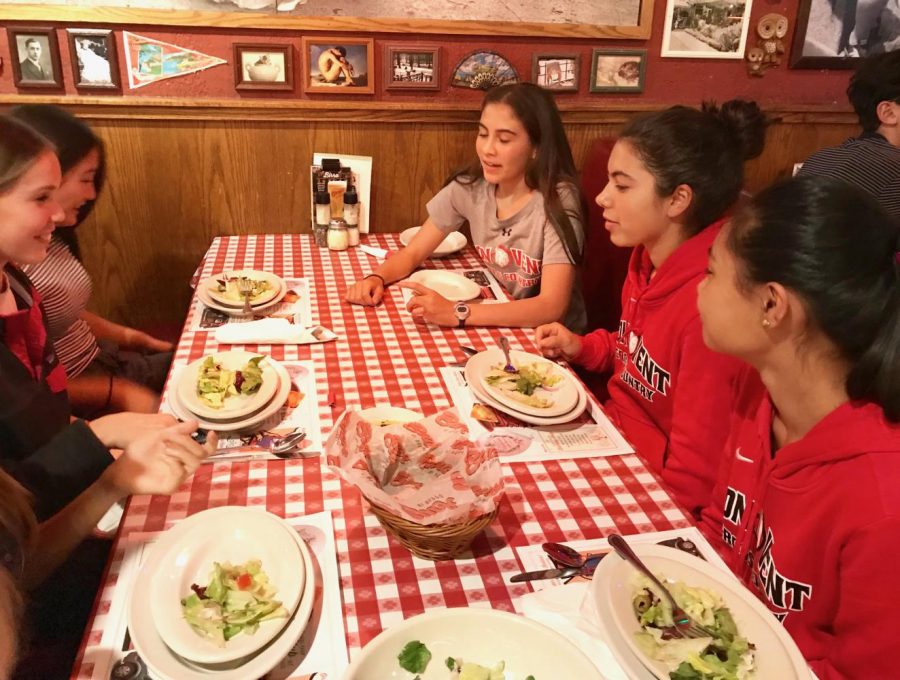 Freshmen part of the cross-country team eat dinner at Buca de Beppo in preparation for their race at the Mt. SAC Invitational tomorrow. Runners left school after F Period and bused to Los Angeles.

WEB EXCLUSIVE  After weeks of training on the San Francisco hills, bonding through long bus rides and team dinners, the Convent & Stuart Hall cross-country team will run a 5K at the Mt. San Antonio College Invitational, also known as Mt. SAC, on Friday, Oct. 20th in the town of Walnut just outside of Los Angeles.

The Mt. Sac Invitational is the largest cross-country race in the nation, with approximately 20,000 runners from all over the United States, according to head coach Mike Buckley.

“It’s a great competition and I love taking the kids down there,” Buckley said. “We get to race against schools from the south which we don’t usually see and it is a great experience.”

In preparation for the terrain of the race, the runners trained on steep and long hills, according to Buckley.

Practices last week also included intense indoor workouts as a result of the air quality and smoke, according to freshman Dagny Wallace.

“The big thing is that we have to be fit for this particular purpose,” Buckley said. “We are going to a place where it is typically hotter and where the terrain is very hilly. Weather is also a difficult variable to control so that’s a lot harder to practice for.”

The race not only offers a chance to compete but also leisure activities such as a trip to Disneyland and team bonding, according to senior Katie Thomis, who has gone on the trip the past three years, said.

“We work really hard the whole season and during the race which makes us feel really accomplished,” said Thomis. “After all that hard work is done, it is really satisfying to go to Disneyland and have fun together.”

“Sharing those common experiences of challenge and unwinding and having fun is how you make friendships and a strong team,” Buckley said. “I think that the camaraderie and social aspect is my favorite part.”