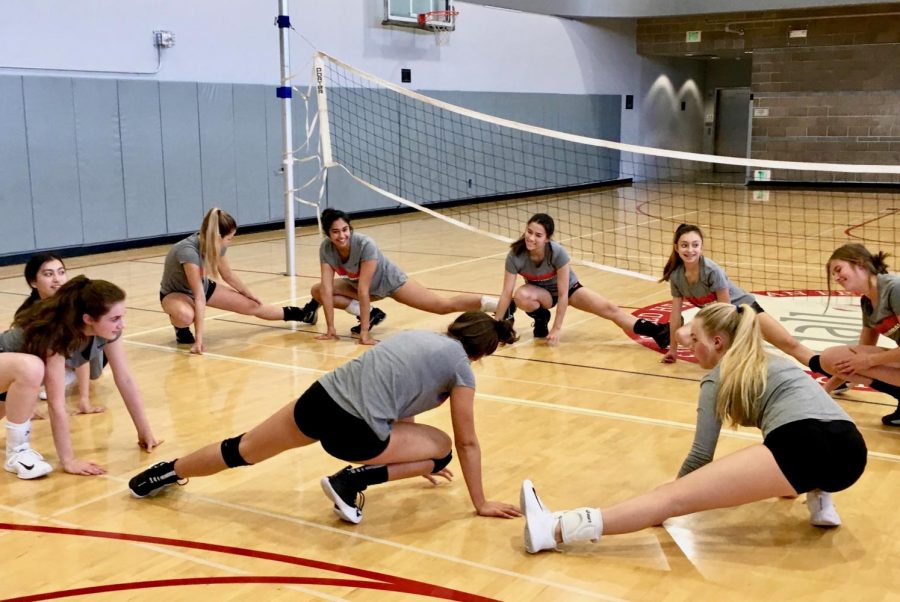 The Varsity Volleyball team stretches together to prepare for practice after having the past several days off. The team as well as all other school related sports, resumed practices as normal today after school.

WEB EXCLUSIVE Indoor and outdoor sports practices resumed today after several days off last week due to the poor air quality from the raging fires in the North Bay.

“We canceled practices based on the air quality index,” Athletic Director Elena DeSantis said.  “Outdoor practices were canceled quicker than indoor, but we did end up canceling indoor when the air got really bad.”

Most athletes planned on having their original practices or games in the morning, however by the afternoon most events were canceled.

“It was for the best I think,” freshman Ella Holliday said. “But, I would have preferred to have practice because I felt like I had nothing to do after school.”

Some students such as junior Camilla Sigmund, who participate in sports outside of school, continued to have practices throughout the week despite the poor air quality.

“I row at Pacific Rowing Club and according to the [National Collegiate Athletic Association] guidelines, a sports team can keep practicing until air quality hits 200,” Sigmund said. “So my team didn’t stop practice the entire week.”

If teams from school or outside decided not to cancel practices, easier workouts were planned to avoid overexertion.

“It was really difficult for us to row and exercise at the same level and capacity so we had a lighter week, more technique oriented,” Sigmund said. “But in the end we have races coming up and we have to train for them, so that was our only option.”

Games that were canceled last week are in the process of being rescheduled and all practices have returned to normal schedules. Practices still have a chance of cancellation if air quality drops again, according to DeSantis.

“We are waiting for the air quality index to come in,” DeSantis said. “If it’s bad air then we will cancel — even if it’s last minute.”