Minor labor can cause major issues 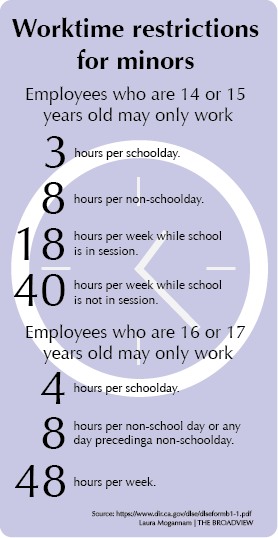 The prospect of learning the difference between an I-9 and a W-2 form, figuring out how to use company technology, and balancing work with school commitments is a daunting load for any employed teenager to handle, but it can be made even more difficult by underestimation from employers.

Despite the added precautions of work permits and restricted hours, laws meant to protect minors are often abused in the workforce.

One of the most prevalent violations in regards to teenagers and young adults is when employers hire someone as an intern, according to lawyer Robert Nelson, who specializes in employment law.

“Employers are like, ‘I need somebody to do the scut work around here, but just being around us is so valuable because they are gaining work experience or a foot in the door to our industry’ — and it is unlawful,” Nelson said. “If those people ever get called on it, they will have to end up paying the ‘intern’ the money that they should have been paying them all along.”

Nelson said employees, including interns, need some exchange for the work they are doing, such as money or community service hours.

A Convent High School student, who wishes to remain anonymous in fear of losing her job, currently works at a camp and tutoring service where she said her employer wanted her to work an unpaid 30-hour trial period. She said they wanted to have to time decide whether or not they should hire her because she had no prior teaching experience.

“I was confident in my abilities as a teacher,” she said. “I was able to write them back, and I said that I was qualified for pay and was not interested in this job if they were not going to pay me for my first 30 hours.”

The employer immediately decided to pay her $16 per hour after she confronted them.

“Some of my coworkers did not complain,” she said. “They ended up working the 30 hours for free.”

Teens can run into other problems in the workforce besides being underpaid such as discrimination and harassment. Some warning signs are employers that are creepy, offensive or ask inappropriate questions during an interview, according to Nelson.

“Generally, people are on their best behavior when they are either interviewing for jobs or interviewing candidates for jobs, so it is only going to go downhill from there,” Nelson said. “If you get a bad sense from someone during the interview, it is usually a pretty good indication that is not going to work out.”

Junior Cat Tseyref worked in retail last March and says she was constantly underestimated because of her young age. Tseyref first noticed the the lack of respect from her employer before she even officially started.

“My boss looked down on me because he did not think someone my age could be responsible,” she said. He would go up to customers I was talking to and say, ‘Don’t listen to her. She is only 15.”

Tseyref said her boss did not treat any of her coworkers, who were all older than 30, like he treated her.

“He treated my coworkers as if they were friends,” Tseyref said, “but he would always call me a child.”

“My boss looked down on me because he did not think someone my age could be responsible.”

Tseyref never confronted her boss, and the comments persisted until she quit.

Employees who are minors and have a concern should first go to their parents and then consult one of the numerous state and federal agencies that exist to help with certain types of employment violations, according to Nelson.

“There are entities that handle people not being paid what they should such as the California Labor Commissioner, ” Nelson said. “Conversely, if workers are being harassed or discriminated against, there is the Department of Fair Employment and Housing. Although, sometimes it is quicker reaching out to an attorney.”