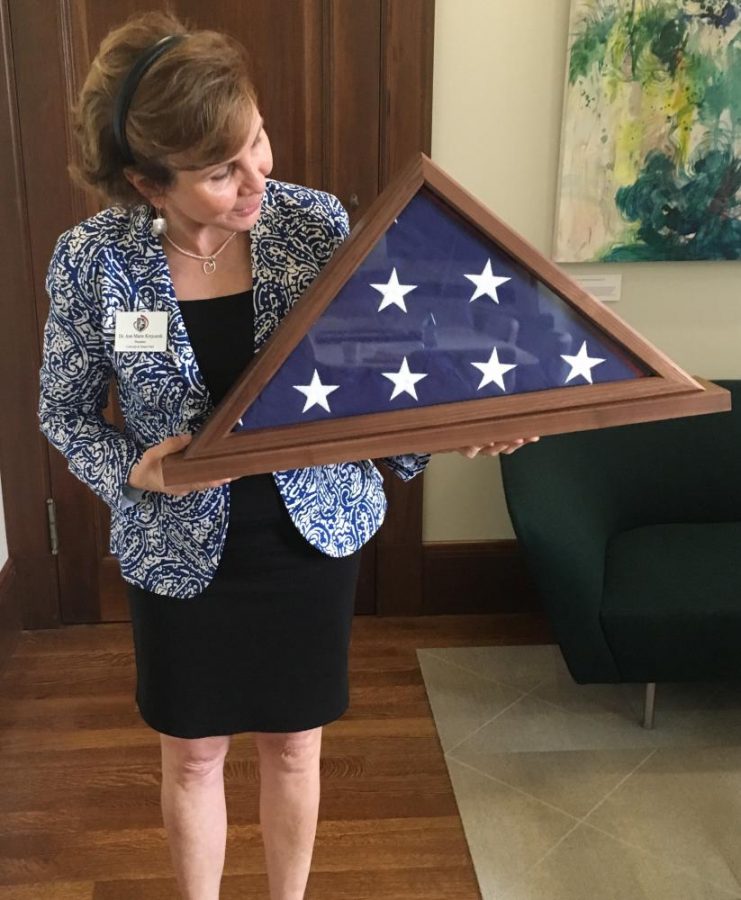 President Ann Marie Krejcarek holds the flag gifted to the school by House Minority Leader Nancy Pelosi. The Capitol Flag program allows members of Congress to request a flag to be flown over the U.S. Capitol on behalf of a constituent.

When President Ann Marie Krejcarek found a package waiting for her one day in the middle of June, she was surprised to find that the person who sent it was House Minority Leader Nancy Pelosi, whose four daughters all graduated from Convent.

“It was a little bit out of the blue,” Krejcarek said. “I got a FedEx box and I found this wonderful letter addressed to me personally.”

The box contained the American flag that flew over the U.S. Capitol when Pope Francis addressed the Joint Session of Congress on Sept. 24, 2015.

“On that inspiring day, Pope Francis renewed the faith of Catholics worldwide and inspired a new generation — regardless of their religious affiliation, to be instruments of peace.” Pelosi wrote in the letter. “He reminded us of our sacred and inescapable responsibility to those struggling to escape poverty, persecution and war.”

While the flag connects to the four divisions through religious affiliations, it also embodies other meanings.

“[The flag] symbolizes the connection that we have to our elected leaders,” history teacher Michael Stafford said. “It also in some ways symbolizes our global connections to other global institutions like the Church.”

A different flag is flown over the Capitol building everyday, and sometimes multiple flags fly in one day, according to Stafford.

“Flags can be [given] out as gifts and constituents can request them,” Stafford said. “[Which is] cool because the Capitol is a beautiful artifice and it’s a place that whenever you walk in, there’s a buzz, a feeling of energy that things are happening.”

Krejcarek has already used the flag to begin the school year with the Convent & Stuart Hall leadership team.

“The raising was beautiful,” Krejcarek said. “I read the letter when we raised [the flag] to our leadership team — which was about 27 of us — and when the day was over we performed the folding ceremony.”

Krejcarek sent a photo to Pelosi of the flag in its case to show gratitude for the unexpected gift.

“[The flag] was a resurgence of keep on doing the right things at the school — keep alive and well on what Sacred Heart does stand for uniquely,” Krejcarek said.” It felt quite personal not just to me, but to me as a part of this school.”