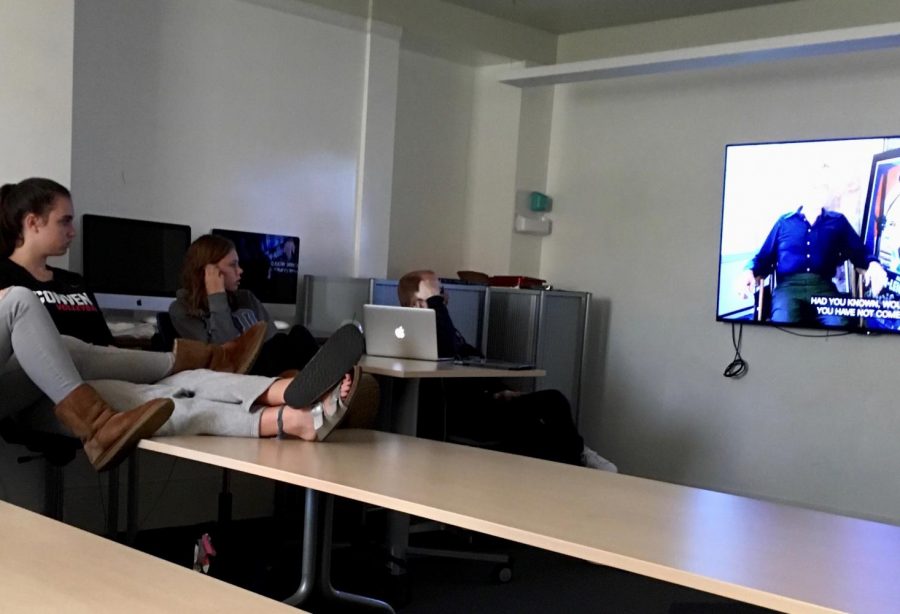 Juniors Amelia Estes and Molly Brown watch an interview between Charlton Heston and Michael Moore in “Bowling for Columbine.” Heston was the president of the National Rifle Association from 1998-2003.

WEB EXCLUSIVE In recognition of the recent Las Vegas shooting, a junior Ethics class, taught by Paul Pryor Lorentz, watched the documentary “Bowling for Columbine” and discussed their opinions on gun control.

“‘Bowling for Columbine’ is something I’ve shown the past few years I’ve been teaching here,” Pryor Lorentz said. “It seems like a very good entry point into talking about the controversy surrounding guns and violence these days, as well as revealing different sides of the conversation. I think the viewpoint it has is in line with our Sacred Heart values as a school, which is justice, nonviolence and pacifism.”

“Bowling for Columbine,” a documentary written by Michael Moore in 2002, addresses the prevalence of guns in American history and its effect on American culture today.

“Watching the movie pushed me away from the idea of banning guns altogether because it doesn’t seem like a realistic solution,” junior Camilla Sigmund said. “Although a lot of people were affected by the film emotionally, it’s important to learn from it and hold bigger discussions about gun violence.”

Pryor Lorentz was a junior in high school when the shooting at Columbine High School took place.

“I’d never want that experience for my students, but I want to teach and contextualize what’s taking place in events like the Columbine High School shooting,” Pryor Lorentz said. “I never want to presume that students have engaged in conversations about topics like that, and we have to constantly remember that, especially as teachers.”

Other courses, including some junior U.S. History classes, have also taken time to remember the victims of the shooting. The classes discussed the Second Amendment, which gives the right to bear arms, according to junior Thomasina Akamine.

“I think it’s important to have the freedom to bear arms, but I think that freedom is being violated,” Akamine said. “I think it’s good that we talk about it because we may personally go through events like the recent shooting in our lives. The event and discussions following have made me more passionate about needing stronger gun laws.”

Having conversations to discuss events like the Las Vegas and Columbine High School shootings is the best way for our school to address controversial issues, such as gun violence, according to Pryor Lorentz.

“In an attempt to treat our students like adults and adult-thinkers, my hope for the students is that you learn here enough about the world and being in the world that you go out and have an impact on the world,” Pryor Lorentz said.