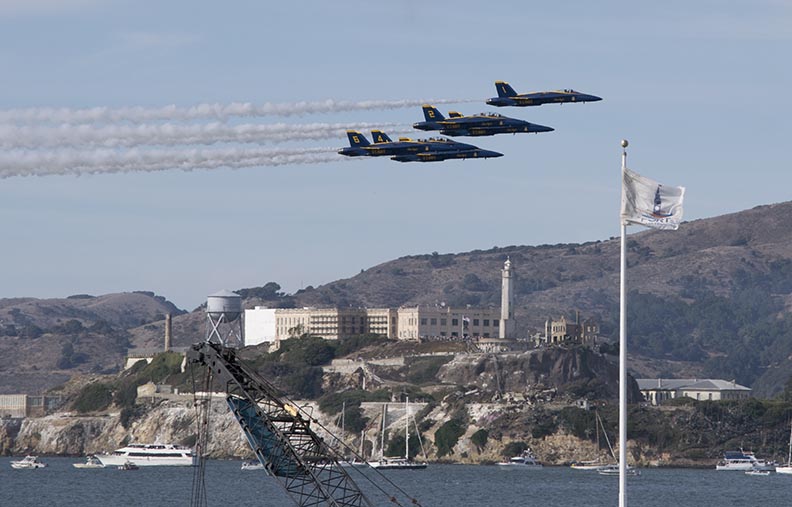 Blue Angels jets fly over San Francisco Bay in front of Alcatraz Island during last year's Fleet Week. Planes fly over the City, Marin County and the East Bay during the Crissy Field airshow, often rattling windows, setting off car alarms and causing dogs to bark during practices and the airshow.

The Blue Angels’ ear-piercing shriek as the five jets fly over the Bay Area is the most audible aspect of the San Francisco Fleet Week, but it is only one of 14 events occurring in the week-long celebration, which commences Oct. 1.

San Francisco Fleet Week is the largest annual event held in Northern California, drawing 1.5 million visitors to the Bay Area and is the standard for Fleet Week events in the United States, according to David Cruise, External Affairs Manager and Public Information Officer.

“In 1981, then-Mayor [Dianne] Feinstein, now Senator Feinstein, had this wonderful idea of resurrecting a very old tradition to help us remember and celebrate our armed sea services,” Cruise said. “That is what started the modern-day Fleet Week in America. It started here in San Francisco and it’s been going strong to this day.”

Junior Sofia Pirri, who credits her military family for her interest in the armed services, says she has an uncommon appreciation for Fleet Week.

“Growing up, I have always wanted to be in the military, and getting to be around people that served our country was something that was just a really big deal for me,” Pirri said. “To me, it’s like my own little holiday. It is really special to me and I am always super bummed if I can’t go.”

This year’s event is the 37th annual San Francisco Fleet Week, but the focus of the celebration has been modified through the years.

“In 2010, our mission changed from featuring the armed services and the big guns of the military to showcasing the humanitarian assistance and disaster response capabilities,” Cruise said.

While the Blue Angels are famous for their acrobatic performance in the skies above the Bay Area, features such as the San Francisco Center for Humanitarian Assistance, created in response to this mission change, tend to fly under the radar.

“We showcase the capabilities of the military who will be able to help San Francisco and the Bay Area during times of crisis, like a large earthquake,” Cruise said. “We have various trainings between service members who are visiting, first responders, and emergency managers in the Bay Area to help them establish relationships so they are not exchanging business cards on the battlefield.”

Junior Hannah Kelliher has heard the Blue Angels overhead, but personally has never experienced the other Fleet Week events.

“Fleet Week is a really big deal in San Francisco — everybody who lives in San Francisco knows about it and it’s a big community event,” junior Hannah Kelliher said. “I have only heard of going to the Marina Green to watch the Blue Angels — nothing else.”

Other attractions of Fleet Week include the AT&T K-9 Heroes: Bark at the Park, a free event at Duboce Park featuring demonstrations by K-9, rescue and therapy dogs as well as the San Francisco Fleet Week High School Band Challenge in Golden Gate Park.

“It’s been a signature event since 2010,” Cruise said. “We bring 10 Bay Area high schools to compete for cash prizes and they play alongside our Marine Band. Since 2010, we’ve handed out over $200,000 to Bay Area schools to help their music programs.”

The members of the armed forces participating in Fleet Week have contributed more than 10,000 hours of community service in the Bay Area since 1981, according to Cruise.

“Serving in the armed forces has always been something courageous and brave,” Pirri said. “People never talk about it enough, it’s kind of our taboo topic in America, but being able to see it and experience it for a week just really makes me gung ho and empowered to want to do it more.”