Harnessing the power of the ring

Network alumnae connect with the wave of a hand. 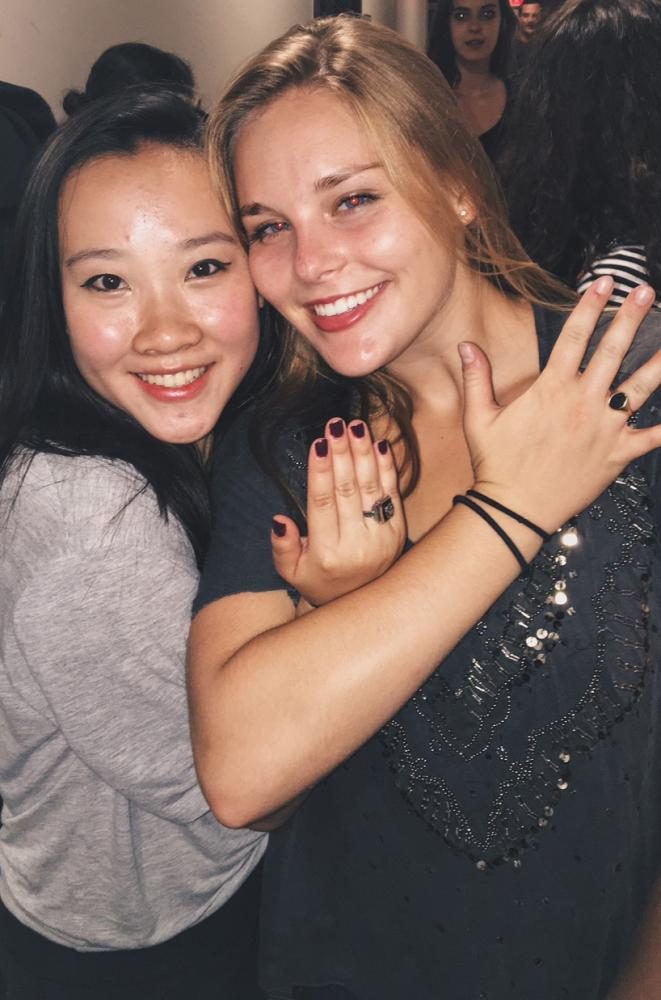 Sacred Heart Schools alumnae Liana Lum and Suzanne Antoniou pose holding their high school class rings, signifying they are members of a greater network of schools. Lum (‘16) graduated from Convent of the Sacred Heart in San Francisco, while Antoniou (‘16) attended Stone Ridge in Bethesda, Maryland. The two met at Brown University’s orientation and spoke of attending all girls schools.

As seniors near the end of their high school careers and begin their trek to college, starting a network of connections within the alumnae community can prove invaluable to a student’s academic and career future.

“I’ve used the alumnae network as a resource in the past when we had a panel of alumnae for a STEM presentation,” Liana Lum ’16, who currently attends Brown University, said. “I reached out to a neuroscientist who showed me around her lab. Being part of the Sacred Heart network gives us such great connections to women with amazing accomplishments.”

There are over 140 Network schools around the world, according to the Associated Alumnae and Alumni of the Sacred Heart website.

Through the vast network of alumni in the United States alone, Jeanne Asdourian (’79), chairperson of the AASH 2016 conference in San Francisco, encourages students to utilize the Sacred Heart in building their futures, both academically and professionally.

“Knowing people who can help you advance, who can spot opportunities for you, is always a good way to help give you a boost,” Asdourian said. “There was a young man who was an alumnus of Stuart Hall High School, and he was looking specifically at public radio stations for a career. I happen to know somebody who works for KQED, so I made the introduction.”

In college, fellow alumni can help advise students interested in a similar academic or career path, as well as help initiate more connections to aid them along the way.

“It’s kind of like a mentoring opportunity,” Asdourian said. “If a student connects with one of the alumnae, then that person can kind of guide them into what they would need to study and what path to take to be successful.”

The Sacred Heart class ring, a symbol of a graduate from a Network school, can assist alumnae in forming valuable connections among fellow graduates to build their personal and professional network.

Apart from assisting graduates academically, the “power of the ring” can extend to peer relationships as well, expanding an alumna’s Sacred Heart network in both a professional and casual manner.

“There’s actually a Sacred Heart girl from Stone Ridge [Bethesda, Maryland] who lives a floor down from me,” Lum said. “We were in the same orientation group and mid-conversation she said hi to another girl. I asked her how they knew each other, and she mentioned that the other girl went to a similar all girls school in Miami. Looking down at her hand, I noticed her Sacred Heart ring, and we immediately bonded about the all-girls school experience.”

While each Network school is unique, the traditions and values that come with a Sacred Heart education extend to all branches of the vast network.

“Sometimes people think we attended the same high school when we’ve talked about Sacred Heart traditions,” Lum said. “We just describe the Sacred Heart Network like a chain of fast food restaurants and how we went to different but similar schools. We’ve sang Coeur de Jesus together and she wished me a happy Feast of Mater Admirabilis, and we even have a picture of us together with our rings.”