Internet addiction is on the rise in teens. 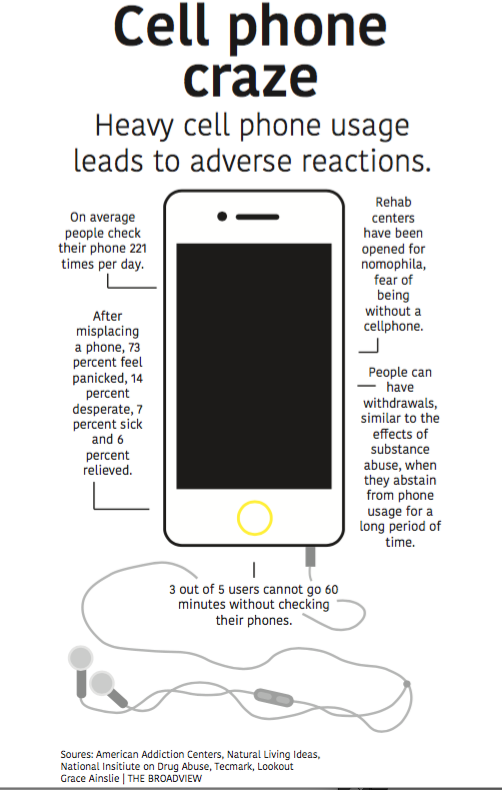 The simple past time of checking a notification on a phone may only take a few seconds, but excessive time on media can turn into an addiction.

“It’s so easy to be on the phone and on social media,” Manisha Punwani, MD said. “I don’t think that’s the problem, it’s the amount. If you are doing it for a limited time and you are doing other activities then it’s fine. But if takes over your life, then it’s definitely an addiction.”

Internet addiction disorder is included in the latest edition of the Diagnostic and Statistical Manual of Mental Disorders, a psychiatric classification and diagnostic tool.

“Out of all the teenagers I see, I’d say the majority of them have this issue now,” Punwani, who practices psychiatry, said. “I specialize in anxiety so I find that internet and media becomes a way to deal with those problems.”

Teens with anxiety often use their phones as a way to warm up to social situations or calm themselves down, but excess time on phones can hinder psychological skill development, according to Punwani.

“Being on my phone reduces my anxiety and puts my mind at ease,” junior Jocey Shilakes said. “When I have my phone, I’m able to contact all my friends and FaceTime and call them and distract myself.”

Phones can also provide an instant sense of gratification, as the user immediately sees notifications on a phone, releasing dopamine in the brain, the neurotransmitter responsible for promoting reward-motivated behavior.

“The more you engage in the addictive behavior, the more dopamine is secreted,” Punwani said. “So you’re happy, but then you want more of it. You need more to make you happy. That’s the problem with the internet and media is it can just become another addiction.”

Similar to cell phones, drug use also releases dopamine, a pleasure-inducing chemical, sometimes resulting in an addiction. Experts in the field are exploring a correlation between the

rise of cell phones over the past decade and a decrease in drug use with teens.

Drug use, excluding marijuana, among teens from eighth, 10th and 12th grade was lowest in 2016 out of the past 40 years, according to Monitoring the Future, an annual governmentally-funded report of teenage drug use. The decline may be due to the fact that teens are replacing drugs with another addiction — phones, according to Punwani.

“People at parties are on their phones so much they may just literally forget to do anything else, like drugs,” senior Hailey Long said. “If you also feel uncomfortable with the things going on around you, it’s really easy to just step back and check your phone for a while. So it’s easier to get out of ‘peer pressure’ situations.”

Teens suspected of having an internet addiction may also be dealing with an underlying issue, such as depression or ADHD, and use a phone as a coping mechanism, according to Punwani.

“Of course that’s not always the case,” Punwani said, “but there should be a lot of education about internet addiction because it would help screen for some other issues and could help the child work towards getting better with that.”