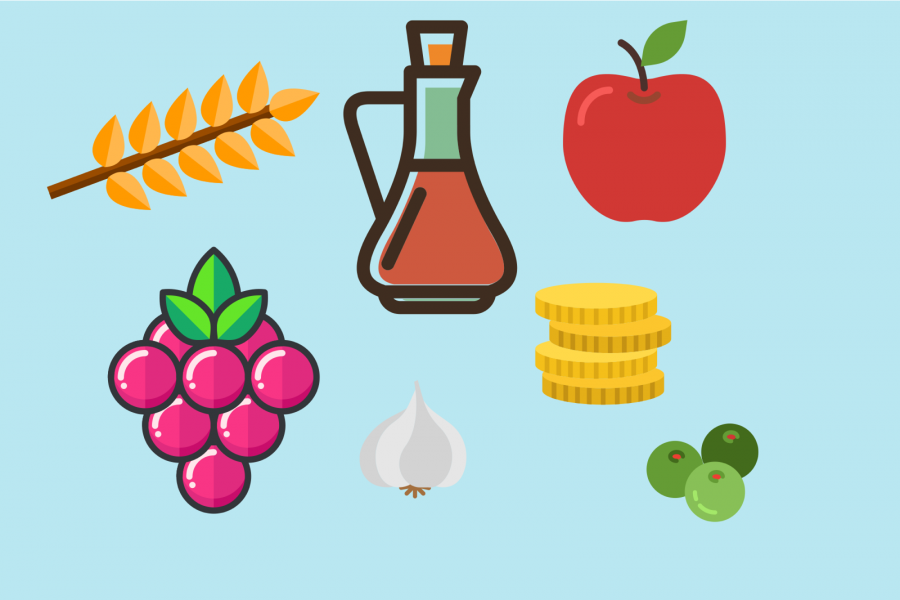 Items part of the Nowruz celebrations include wheat, berries, vinegar, apples, garlic, olives, and various coins. These items, along with others, are placed on the tradition table spread to honor the New Year’s gift of rebirth, health, and prosperity. Images courtesy flaticon.com.

With tables full of seasonal treats and joyous company, millions across the globe began celebrations of the coming of spring today during the first day of Nowruz, the 13-day Persian New Year holiday.

“Nowruz offers a chance to wish for prosperity in the life of the new year,” junior Sophia Davari, who celebrates the holiday, said. “We celebrate old mistakes and negative energy and leaving it in the past to move on completely to a fresh start.”

The annual secular holiday commemorates rebirth and health of life on the exact vernal equinox, around March 21. In 2017, the precise spring equinox, tahvil, occurred early this morning at roughly 3:28 a.m. Pacific Standard Time.

Preparations for Nowruz begin the last Wednesday before the equinox, on Chaharshanbe Suri, where communities jump over fires to represent burning away the the past year, according to Davari.

“We are celebrating a culture that’s been around for thousands of years and it has nothing to do with religion,” Davari’s mother Allaleh Khalatbari said. “It has to do with history, poetry, science, and all of the achievements that the Persian empire has created. We get to celebrate simply being Persian.”

Families and friends celebrating Nowruz convene to honor rebirth and life’s beauty with music, activities, and most notably, a grand feast.

“Iran is a really multiethnic and multireligious state and that often gets of lost in the media,” Roma Parhad, Program Manager of the Iranian Studies Program at Stanford University, said. “Having a holiday like Nowruz that is not religious brings people across beliefs and across divisions in a nice way to just celebrate being Iranian.”

In about two weeks, Persians will wrap up the marking of the new year with Sizdebedar, a day dedicated to the outdoors with picnics, community, and thanking nature.

“Nowruz is the one thing that my family brought from Iran,” Davari said. “It’s a tradition from their native land that ties us back to our culture each year even if we are not back in Iran.”