A match made in heaven 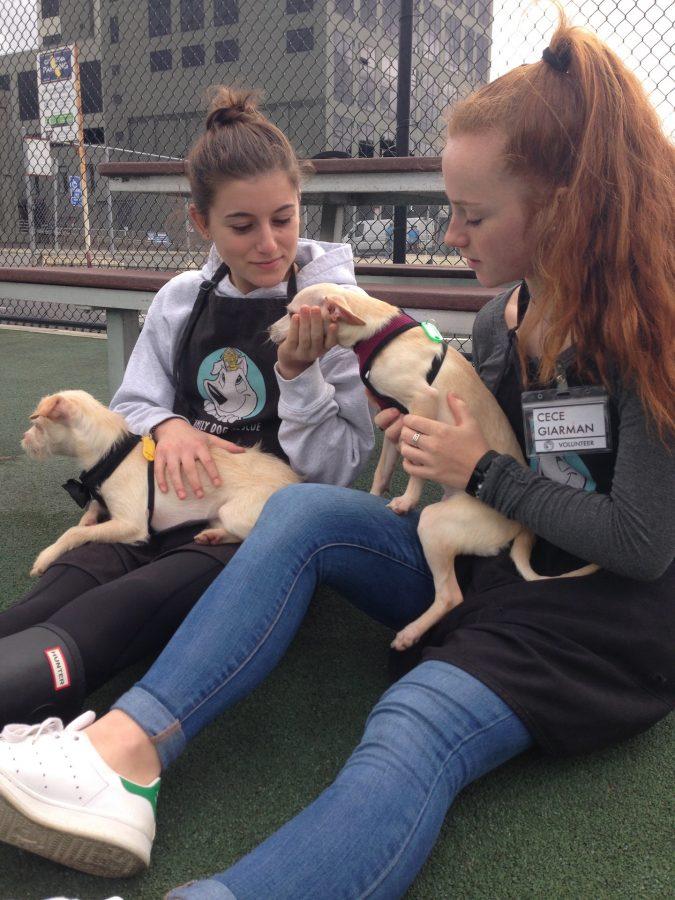 Family Dog Rescue volunteers Wellsley Cohen and Cece Giarman play with two dogs during their weekly shift at the rescue center. Volunteers such as Cohen and Giarman walk dogs, do laundry and clean dishes during their shifts.

On a typical afternoon, sophomore Wellsley Cohen spends two hours at Family Dog Rescue, alternating between socializing with puppies, helping with intake of rescue dogs from Stockton and Tijuana, and giving dogs vaccinations.

Cohen is among a handful of Convent students who volunteer at animal shelters, including the SPCA and other independent rescue shelters.

“We don’t interview people,” Liora Kahn, SPCA Director of Volunteer Services, said. “As long as they’re available when we need volunteers and they’re going to do things the way we do them here, then we are happy to take them.”

The SPCA does require volunteers to take a training course before they begin working with the animals.

Animal shelter volunteers can earn credits toward the 100 hours of service graduation requirement, the volunteer work requires energy and engagement that should come from a genuine interest in caring for animals, according to Cohen.

“You have to go and spend two and a half hours working, and we have a lot of dogs who are special needs — dogs who are older, blind, deaf, missing legs,” Cohen said. “It takes the person who actually enjoys being there and working with animals.”

Spending time at an animal shelter is not for everybody, according to senior April Matsumoto who volunteers at the SPCA, but it can be a rewarding experience for those who enjoy being around animals.

“I would say if you’re not allergic to animals or frightened by animals, you should try it out,” Matsumoto said. “Whether you’re a cat person or a dog person, it can be a great experience.”

The SPCA often pairs new volunteers with the tamer dogs at the beginning, before introducing them to the more behaviorally challenged animals.

Those who donate their time to working at animal shelters do not always receive verbal recognition for their service, but seeing the animals’ progress can be just as rewarding, according to Matsumoto.

“I specifically work in the hospital part of the SPCA with dogs that cannot be adopted at the moment because they are either too sick or injured,” Matsumoto said. “Just interacting with them and having them be treated like they matter not trash is important.”