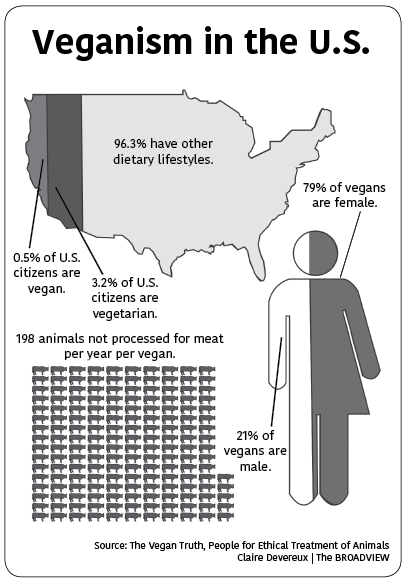 “You’re completely changing your diet and everything you’re used to, so it’s hard,” sophomore Emmy Sobol, who has been a vegan for nine months, said. “Once you get over the hump, you get used to the new food.”

Vegan diets exclude food originating from animals, including meat, dairy, eggs and even  expanding the diet into a lifestyle, with practitioners often vowing to omit animal-based products like leather and beeswax.

Vegan limitations do not necessarily restrict nutritional intake as long as dietary choices vary, according to registered dietitian Stephanie Dixon.

“Almost all foods except for alcohol, sugar and fats give some protein,” Dixon said. “Vegans can get proteins, fats and certainly a lot of fiber if they eat greens and fruit.”

Many pre-made foods, such as frozen pizzas and lasagnas, can contain animal products, making cooking food from scratch is a satisfying alternative, according to Sobol.

Vegans can enjoy desserts like cakes and brownies by replacing eggs with mashed bananas or applesauce and using vegan butter, made with soy milk and coconut oil instead of milk and cream. Brands including Earth Balance and Miyoko’s Creamery sell vegan butter, while So Delicious and Ben and Jerry’s offer vegan ice cream, made with almond or coconut milk instead of dairy.

“I found a bunch of recipes on a website, and you can add ingredients you wouldn’t expect,” Sobol said. “I made cookies with bananas in them instead of eggs, and they were really good.”

Theology teacher Paul Pryor Lorentz made the dietary shift after reading a book addressing the impact of animal products from an environmental, human health and animal rights standpoint. Lorentz eventually quit the diet after six years to support his wife who stopped being vegan during pregnancy, and they are now vegetarians.

“After I read the book [Diet for a New America] and built up that social awareness, I couldn’t help but have it affect the way I saw food and the world,” Lorentz said. “If you eat a heavy animal-based diet, whatever the animal is eating or injected with are now in you too.”

Many meat products often contain chemicals because the animal is given antibiotics or consumes food treated with toxic pesticides.

Dixon says she found her clients embrace veganism primarily for environmental and ethical reasons, including the treatment of animals in slaughterhouses.

“Some vegans feel they promote the meat industry when deciding to consume eggs and dairy products,” Dixon said. “They avoid these because of conditions associated with the way chickens and cows are treated.”

Becoming vegan can help fight world malnutrition since it relies on significantly less crops and water than a carnivorous diet. The food and water used to raise farmed animals could be used to sustain malnourished countries.

Lorentz said he found the diet gave him increased energy, even without stimulants like caffeine.

“I felt healthy and energetic enough for school work and was very attentive to what I was eating,” Lorentz said.

Sobol said she has gained confidence from her vegan diet because she has achieved a unique goal which takes immense effort to sustain.

“It’s sort of different from how everyone else eats so you’re not conforming,” Sobol said. “Being vegan just makes you happier, more energetic and confident.”

Both Lorentz and Sobol say they received support from vegan family members, making it easier to maintain the diet.

“My mom and I do it together,” Sobol said. “It makes it easier because you have all the ingredients you need in your house all the time — you don’t have to go out and buy it special.”

Lorentz said he began his vegan lifestyle in 2004, mentioning he found it challenging to access vegan food at the grocery store as well as restaurants.

“Since 2004, it’s all changed,” Lorentz said. “There are companies with vegan products and labels slapped on their items and vegan restaurants.”

Vegan products have gained popularity in urban areas such as San Francisco, enabling others to adopt the diet and lifestyle, according to Sobol.

“I don’t know if I’ll be vegan for the rest of my life,” Sobol said, “but I don’t see myself stopping anytime soon.”