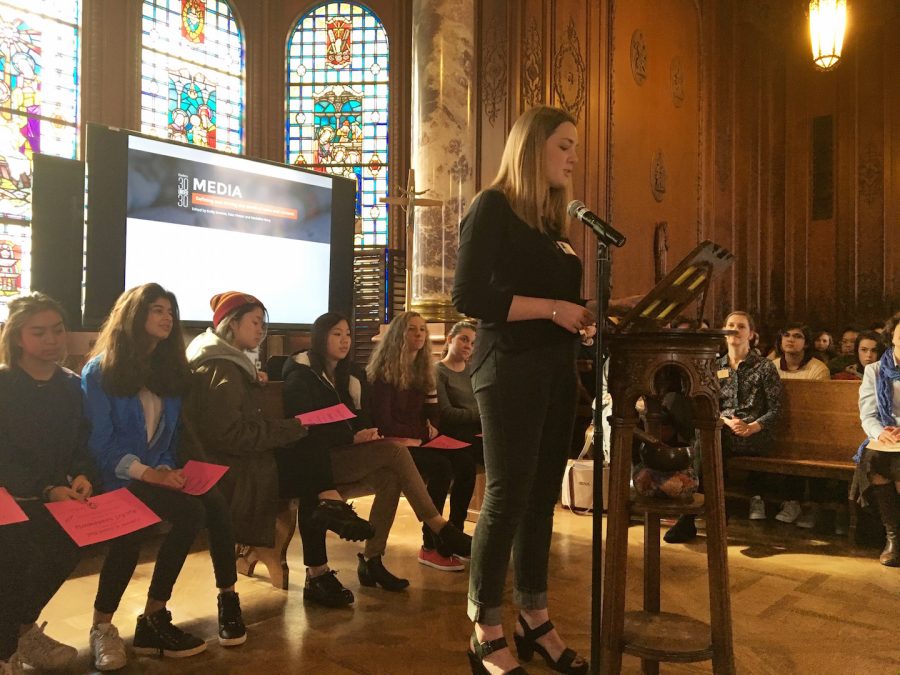 Students and faculty gathered in the Chapel this morning for a special assembly to announce and honor the winners of the annual Kate Chopin Essay Contest. Sophomore Sydney Caba was named the all-school winner by outside judge Libby Brittain (’07).

The English department began the contest more than 20 years ago to emphasize creative writing style and recognize Sacred Heart alumna and author of “The Awakening,” Kate Chopin, according to English teacher Julia Arce.

“The prompt usually inspires very creative and descriptive style writing,” Arce said. “I guess the vision of the contest is to inspire more imaginative writing and to highlight the students whose essays are chosen.”

This year’s judge was an alumna and former editor-in-chief of The Broadview, Libby Brittain who went on to study at Barnard College and intern for The New York Times and work at several tech startups. She currently works with Facebook’s media partnerships and most recently made Forbes’ “30 Under 30: 2017” for Media.

“It’s great to see classmates recognized for their creative work,” sophomore Bianca Mercado said. “I’m personally not the strongest in creative writing, so seeing others acknowledged reminds me that we all bring different things to the community.”

Students in English classes from both high schools responded to the prompt “Dear America,” and were allowed to write about anything, but there was a focus on the 2016 year.

“I really appreciate that this contest exists, but honestly it wasn’t something I was setting out to win,” Caba said. “I’ve always seen myself as more of a science person, so I didn’t expect to to even make it past first round judging, nonetheless win overall.”

Alongside Caba, three students from each grade were awarded first, second, and third place for their work.

“’The Awakening’ is about a woman in the late 19th century struggling to find her creative voice,” Arce said. “As we recognize Kate Chopin, the department is saying we want all the students to be able to find his or her creative voice.”