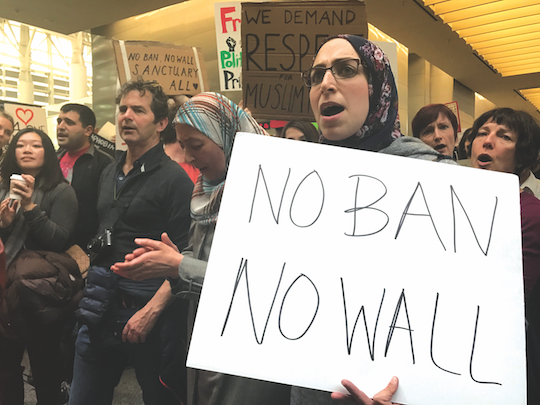 Muslim-American protestor Asmaa Mourad stands with her mother Nihad Mourad repeating a series of chants in the international terminal of San Francisco International Airport. Some protestors made camp in the terminal from the night before and distributed free food, beverages and feminine hygiene products to all attendees.

A freshman World Religions project unknowingly prepared students for the context of protests at the international terminal in San Francisco International Airport. As some entered the airport with packed bags ready to board flights, others touted signs and megaphones protesting the detainment of recent arriving passengers being held in the same building.

“This kind of executive order is really antithetical to the history and principles of this country and the singling out of certain individuals from certain countries,” Karen Musalo, Professor and Director at the U.C. Hastings College of the Law in the Center for Gender & Refugee Studies, said. “There is research that has been done since 9/11 that there has not been a terrorist attack in the United States from an individual from these countries.”

Countries most notably excluded from the executive order include places of origin for many U.S. terrorist attacks such as Saudi Arabia and Pakistan, according to Musalo.

“The appropriate response is to call for a repeal for this executive order,” Musalo said. “I know there are congress members who are putting together legislation to overturn it.”

Senators and representatives are not the only ones responding, as upwards of 2,000 protesters responded to the ban by showing up at major airports to protest the detainment of some arriving international passengers.

“We are protesting for the people, against Trump,” Mohs Algi, who joined the demonstrations on Sunday, said. “He doesn’t want the people to come inside the United States from some countries and we are supporting the Constitution of America.”

Organizer Pete Woiwode began camping out at 2 p.m. on Saturday. Three hundred protesters stayed overnight, with up to 1,000 individuals, according to USA Today.

When the Friday executive order was brought up in a Convent Introduction to Journalism class, freshman Jade Despanie related the order’s terms to a recent presentation and essay assignment in her World Religions class — helping her understand the context of the news discussed in the other course.

“I didn’t think asylum-seekers were a thing, but I knew refugees were and there were people working for Green Cards to come to the States,” Despanie said.

World Religions teacher Kathryn McMichael said she wanted students to do their own research and encounter stories of refugees and asylum-seekers, as she felt the journey would be more meaningful than providing students with assigned readings. Students then created presentations weeks ago, giving classmates a “tour” of their research — telling stories of individuals they studied.

“When we looked up asylum-seekers, we saw these people on a boat asking others to save their lives and rescue them,” Despanie said. “That was something I’ll never forget.”

The freshman religion class is additionally reading “The Children of Willesden Lane” which tells of a young girl on the first train of “Kindertransport” out of Vienna during the Holocaust, as a part of their continued refugee studies.

“This study of refugees is about if we are all made in the image and likeness of God,” McMichael said. “If we leave any of the others out, we have somehow dimmed the beauty of the face of God.”