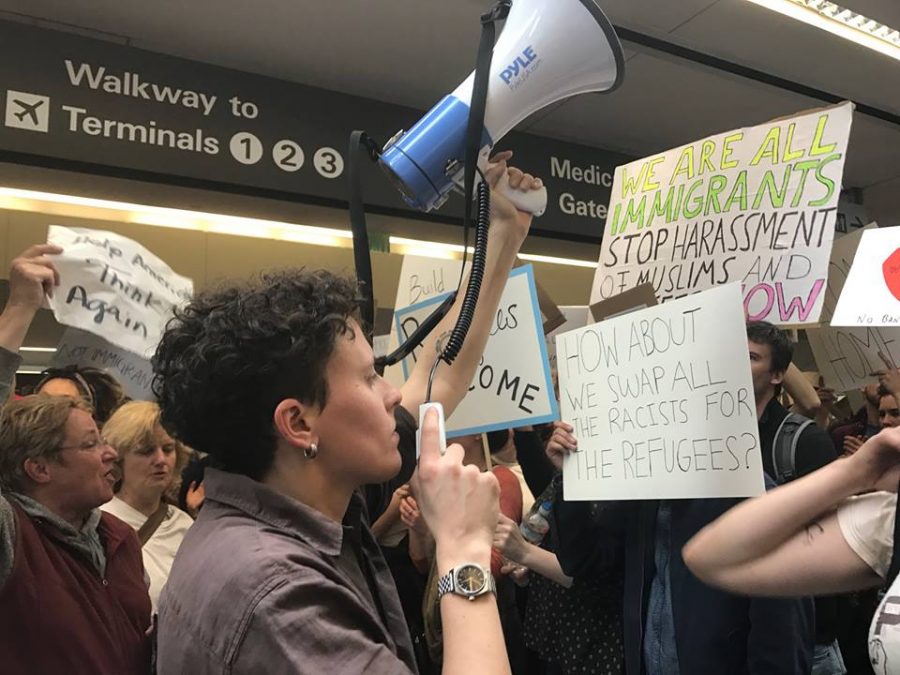 Freedom includes the opportunity for prosperity, success and an upward social mobility for families and children achieved through hard work in a society with few barriers. It is not a mere opinion — it is the American Dream.

Thousands of protesters gathered in international airport terminals and around major U.S. landmarks across the nation in response to the signed order over the weekend — including 10,000 people packing Battery Park in Manhattan, according to a City Hall official — repeating collective chants such as one utilized in the international terminal at San Francisco International Airport: “Say it loud, say it clear: refugees are welcome here.”

Backlash did not end with protesters. Republican Sens. John McCain and Lindsey Graham released a joint statement claiming “this executive order will become a self-inflicted wound in the fight against terrorism.”

The president and supporters of the order justify the ban, citing the Visa Waiver Program Improvement and Terrorist Travel Prevention Act of 2015 issued during the Obama administration.

The issuance allows citizens of 38 countries to stay in the United States up to 30 days without a visa — with exception to nationals of the listed countries who have traveled to, been present in or are also nationals of the countries presently affected by the order on or after March 1, 2011, according to the U.S. Department of State, Bureau of Consular Affairs.

The ruling, however, still grants individuals from ineligible countries the ability to apply for a visa using the regular appointment process at a U.S. Embassy or Consulate.

From 1975 to 2015, only 20 out of approximately 3.2 million refugees admitted into the United States conducted terrorist attacks — an estimated 0.00062 percent, according to the Cato Institute.

Zero attacks took place by terrorists originating from the seven countries listed in the ban.

Over the past 40 years, the chance of an American being killed by a refugee is one in 3.64 million.

The advancement of women in key cabinet positions would have been stymied without Madeline Albright fleeing Czechoslovakia and eventually becoming the first female U.S. Secretary of State.

Nearly 1.17 billion people would have nowhere to turn for their burning inquiries if Sergey Brin was not allowed to enter the United States from Russia to eventually co-found Google.

If an order of this magnitude was issued 50 to 60 years ago, nearly 30 percent of Convent students’ grandparents may have potentially been barred from entering the United States to pursue their own form of the American Dream — or maybe even to see their granddaughters receive a valuable education they may have never imagined obtaining themselves.

As we are encouraged to speak our minds in the comfort of classrooms located in one of the most prosperous cities in the nation, it should be our duty to not only recognize our privilege — but to do everything we can to ensure others have a chance to live lives they long to lead.

Safety from blatant harm or the longing to create a better life for ourselves or our families is not a luxury nor is it a privilege. It is a universal human right.