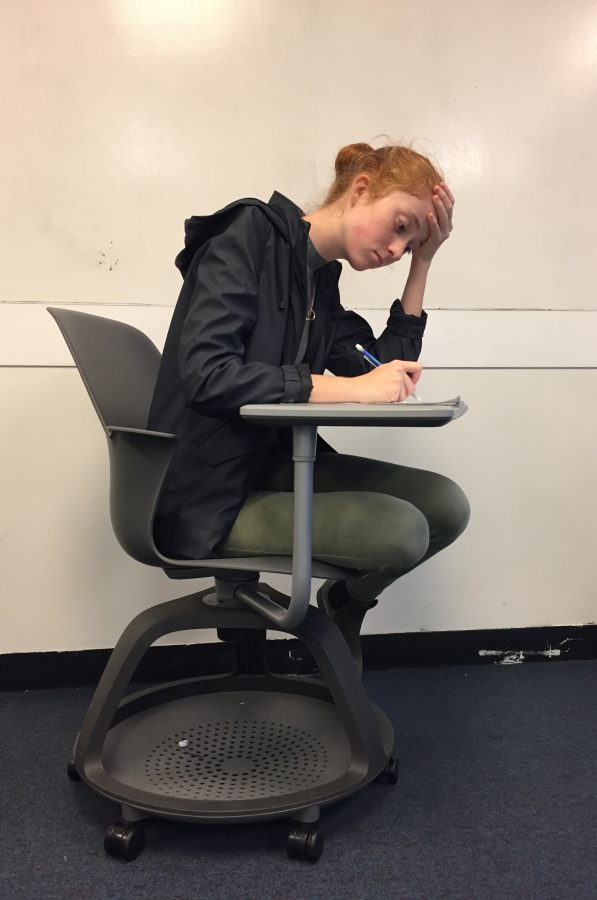 Sophomore Kate Ward writes a creative story for the Kate Chopin Writing Competition. Each story will be judged by the English department and the winner will be named at an assembly later this year.

The entire student body took part in the Kate Chopin writing contest today and yesterday, in which students are given a creative writing prompt to reflect and write an essay on.

“[The competition] was started by two teachers who worked here named Ann Cromey and Charles Brady,” English teacher Julia Arce said. “It was inspired by Kate Chopin, a Sacred Heart alumna and author of The Awakening, a coming of age story most seniors read.”

This year’s two-word prompt, ‘Dear America,’ was inspired by recent political and social events but also gave students the freedom to write about anything inspired by the prompt, political or not, according to Arce.

The prompt allowed students to write about the different historical events, according to sophomore Megan Mullins.

However, some students found last year’s prompt about change and experiencing indifference much more enjoyable and interesting to write about, according to sophomore Camilla Sigmund.

“[The prompt] last year was definitely better because change can be interpreted in so many ways,” Sigmund said.“ It could be a many types of changes and that gives you a lot of room to write about whatever.

The contest’s goal is for students to step out of their writing comfort zones and write about experiences that are close to them while still following the prompt according to Arce.

“I hope that every student feels affirmed in taking creative writing risks to share their heart and their feelings and I hope that they simply develop the enjoyment of celebrating their own writing and the writing of their peers,” Arce said.