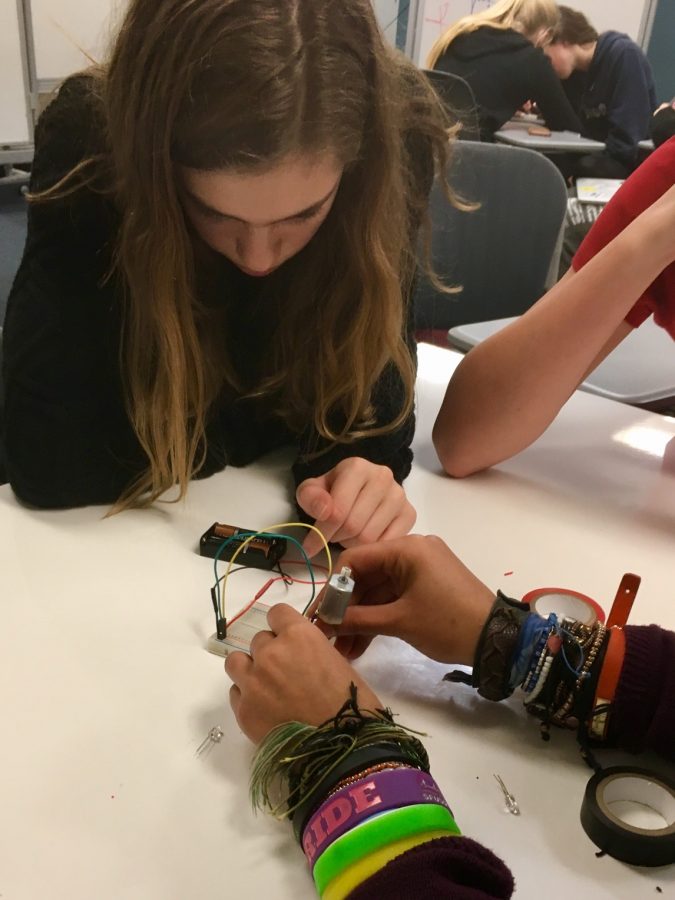 Robotics team member Zoe Hinks works on an in-class activity during the freshman robotics elective class. Hinks will participate in FIRST’s Robotics Competition along with three other students.

Four students recently began a six-week journey to prepare for and take part in the San Francisco Regional Robotics Competition, as part of a citywide girls-only team.

“Some of our students have joined an all-girls team in San Francisco,” robotics advisor Chris Person-Rennell said. “Convent does not have its own team, mostly because there is a huge financial obligation of about 15 to 20 thousand dollars.”

Innobotics, the school robotics club, was formed last year through the efforts of two former seniors —  the successful club allowed for the creation of a freshmen elective class that focuses on programming, electrical systems, and different kinds of mechanical systems.

The competitive team, nicknamed “The Missfits,” will design a robot to compete in a designated area, similar to a sporting field, where it will complete certain challenges like tossing a ball or placing objects in specific places, according to Person-Rennell.

“The new robotics team will compete in FIRST’s, or For the Inspiration and Recognition of Science and Technology, 2017 San Francisco competition,” freshman Zoe Hinks said. “Basically, we will have to prepare an airship for flight and during the competition we will collect fuel and gears for the airship with our robot.”

Until the competition, Convent team members Hinks, and juniors Natalie Lunbeck, Halie Kim and Trinity Lee, are asked to meet six days a week to program, design, prototype, test and practice control over the robot, according to Lunbeck.

“I think this is really exciting because it is like nothing we have done before,” Lunbeck said. “It’s a real opportunity for us to expand and explore and to really test our knowledge.”

Although the history of robotics at Convent is short, the passion for the sport is still strong within the community and prevails with growing interest, according to Person-Rennell.

“Traditionally these classes tend to be predominated by boys due to socio-stereotypical norms,” Person-Rennell said. “It is really important that we continue to have an all-girls robotics class so women have the opportunity to explore and enjoy with same level of satisfaction.”