Cafe to perk up Fillmore 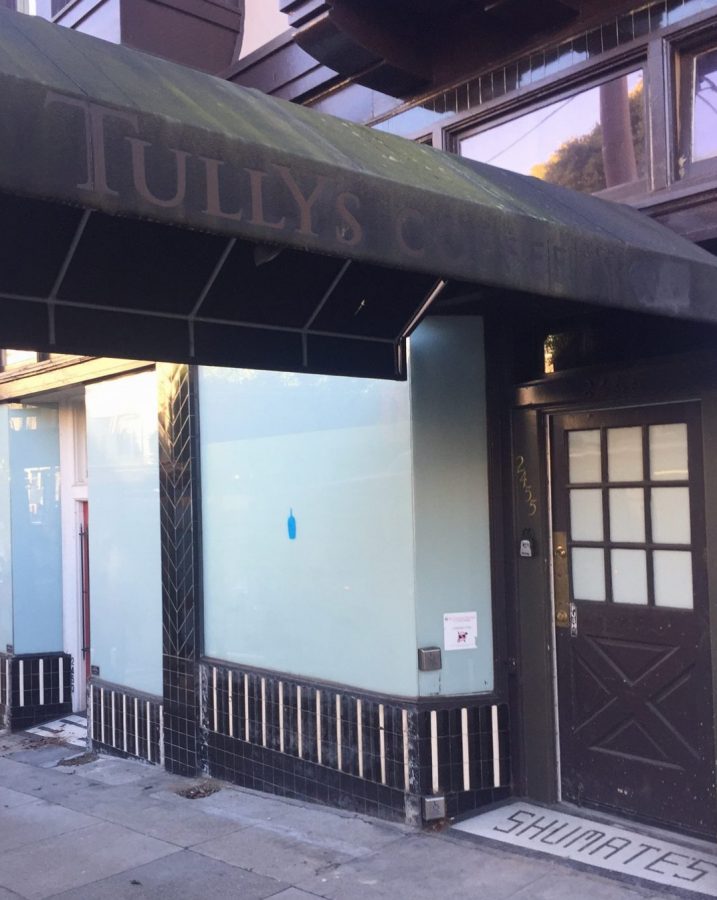 Previous Tully's Coffee, Blue Bottle undergoes renovation before opening to the public, including students. The space has been vacated for three years.

Stickers of blue bottles decorating the glass windows of the vacant corner on Fillmore and Jackson streets confirm long-standing rumors that artisanal coffee company Blue Bottle will occupy the space, however complications have delayed its opening.

“The Board of Supervisors had to approve for Blue Bottle to open there,” Meehan said of San Francisco’s governing body. “We also needed to upgrade the electrics with PG&E. That’s also a very long process because that requires putting in a new vault in the basement. It’s hard to give a firm opening date before we get that from PG&E.”

Tully’s Coffee, which previously occupied the space two blocks from campus, closed its doors in Nov. 2014, leaving students without a caffeine fix for the past two years.

“I went to Tully’s almost everyday,” junior Sarah Mahnke-Baum said. “Sometimes I’ll go to Starbucks, but it’s not as convenient because it’s so much farther away. I can’t go there at lunch if I want to get anything else done at school because it would take up my entire lunch.”

“I’ve had Blue Bottle at the downtown store and in LA, but I don’t have it that often because there are no locations close to me,” senior Hailey Long said. “Blue Bottle is really expensive so I can’t have it all the time, but it is really good and I would go to the new location every now and then.”

One cup of Blue Bottle coffee is typically $3 to $4, but special flavors run higher, such as the limited edition Yemeni coffee at $16 a cup. A few blocks down Fillmore, Starbucks charges $1.85 for its smallest cup of drip coffee.

“We put a lot of work into sustainability and where our coffee comes from,” Meehan said. “The coffee is organic, the milk is organic and our cups are biodegradable and compostable. We also pay our employees well above the minimum wage.”

Mahnke-Baum says the future store’s closeness to school would make up for the coffee’s high prices.

“Since Tully’s closed, I make coffee at home and bring it to school,” Mahnke-Baum said. “I’d be more likely to go to Blue Bottle than to Starbucks if I wanted to buy something after school because it’s closer, even though it is more expensive.”

Blue Bottle is open to hiring high school students as employees if they meet the age requirement of 18, according to Meehan.

“We’ve got delicious coffee and lots of surprises with food,” Meehan said. “We’re really excited to be apart of the Fillmore community and to welcome you to the store — and we apologize for taking so long to open.”