Election results not an excuse for hate 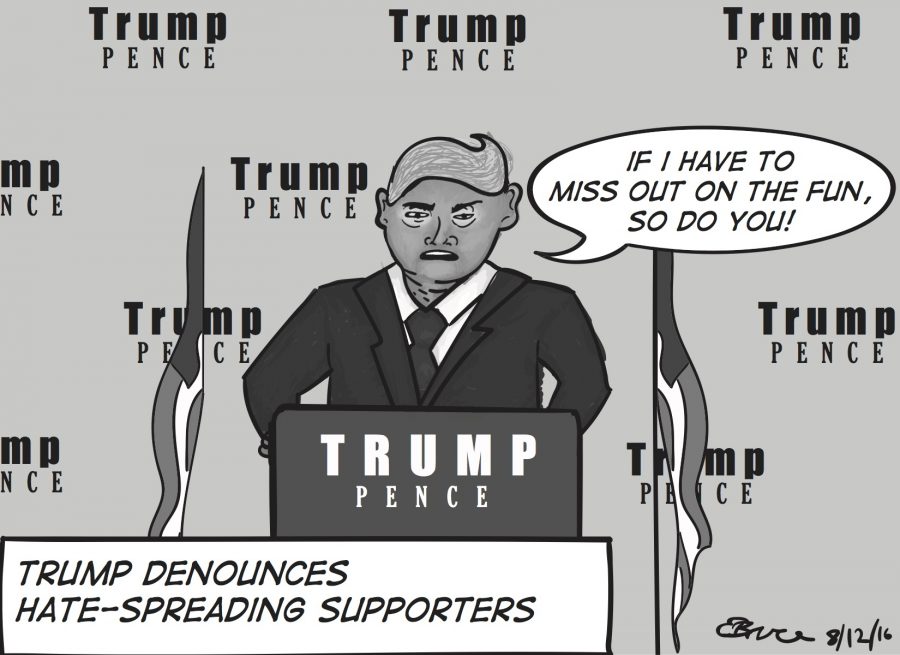 Threats to women in hijabs, walls graffitied with racist and xenophobic statements and even middle-schoolers chanting “Build the wall!” in their lunchroom have circulated through social media in recent weeks — indicative of one disturbing effect of the results of the presidential election.

President-elect Donald Trump made inexcusable comments about Muslims, women and other minorities throughout his presidential campaign, and some Americans appear to be taking his victory as an opportunity to behave hatefully.

Normal, everyday people often emulate persons in positions of power. Actors, musicians, politicians, authors and other celebrities hold influential positions in society and commonly set the acceptable standard of behavior, or demonstrate the best way to act or respond to a certain situation.

Unfortunately, possessing an Academy Award or Grammy, having the most hits on Billboard’s Top 100 Chart, being a billionaire businessman, or holding a public office does not give one a “hall pass” to make racist or hateful remarks.

Trump spoke with the vocabulary and sentence complexity of a fourth grader, largely ignored the status quo and threw political-correctness to the winds. In voting for Trump, half the country affirmed his malicious words and actions as tolerable.

Acceptable behavior in Trump’s world apparently includes early-morning Twitter rages, malevolent comments about everyone from a gold star family to his political opponents, and normalization of xenophobia.

In the days following the election, the door to New York University’s Muslim prayer room had “Trump!” scrawled on it and a Baylor University student shoved an African American peer off the sidewalk, calling her the n-word and claiming he was trying to “Make America great again.”

Rapper Kanye West then spent two the majority of two Bay Area shows making hateful remarks about everyone from Beyoncé to Hillary Clinton while endorsing the positions of president-elect Donald Trump, before abruptly cancelling the remainder of the tour.

Between Nov. 9 and Nov. 13, the Southern Poverty Law Center collected 437 reports of hateful intimidation or harassment, with anti-immigrant incidents forming the largest percentage of events reported.

Forty-one of the reports specifically cited pro-Trump vandalism, such as the graffitiing of a unity sign in Connecticut with “Trump 2016,” while the SPLC recorded 20 reports of anti-Trump vandalism and harassment.

The SPLC’s data shows the hatred ingrained in this country — it is a disease that crosses all party lines and embeds itself in each level of society, from first graders to a 70-year-old man.

San Franciscans may live in a bubble of liberalism, but simple human kindness and understanding must extend beyond this city. Political leanings and preferences do not give one free license to attack women, non-Christians, Hispanics or immigrants.

Basic standards of human decency — tolerance, kindness and acceptance — must also cross party lines in order for America to truly be great.