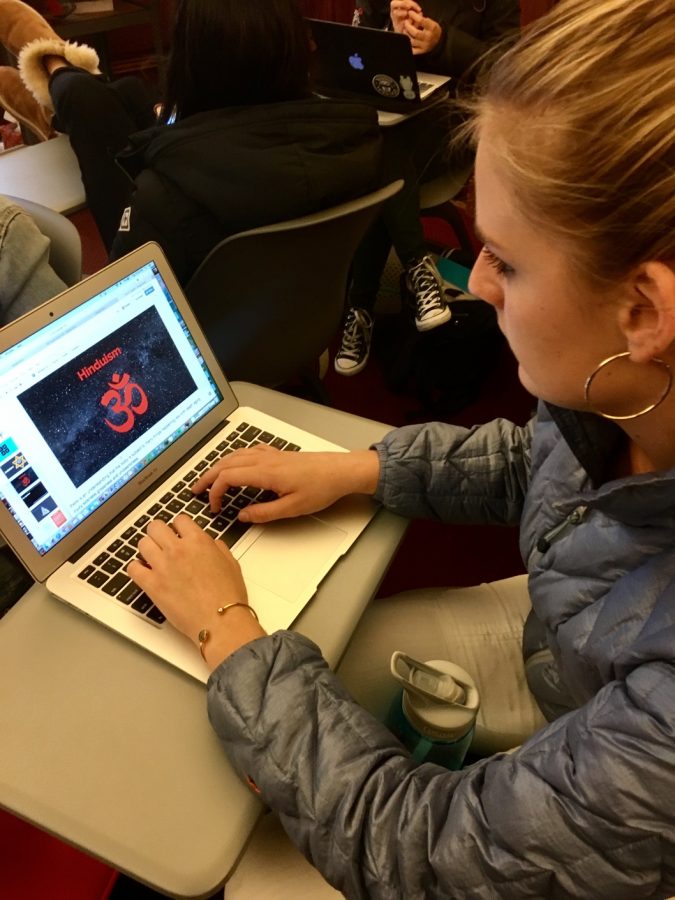 Sophomore Grace Boudreau reviews theology slides before her final presentation in class. Students were asked to give eight to ten minute summaries of an assigned passage, including any and all connections made to them.

Sophomore students began the second presentation day for theology exegetical projects this morning, presenting their in-depth analyses of biblical passages and connections found to other faiths.

“As the school began allowing the curriculum to evolve, we had an opportunity to have a very focused one-semester sacred texts course,” theology teacher Kate McMichael said. “We thought that one way to give students an opportunity to really experience textual analysis in a close-up and personal way was to experience doing real exegetical work.”

The Sacred Texts class is taught during three periods by McMichael and theology teacher Paul Pryor Lorentz. Sacred Texts focuses on strengthening connections from World Religions and aims to push students further in their personal interpretations and views of the communities around them.

After thoroughly analyzing a passage of the New Testament, students were asked to find links between Christianity and at least two other faiths and then to think of a modern way to spread their passage’s message — these three elements combined form the exegetical presentations occurring all throughout this week.

“I think the exegesis really opened some new doors for me,” sophomore Abby Anderson said. “I have never really thought about how many deep connections there are in the religious texts I read before this project.”

Both in and outside of the classroom, sophomores had the entire semester to work with their assigned passage and to thoroughly study the writing and its content, as well as explore different historical and literary perspectives of the passage

“It felt really good to see the connections between the religions and look past their stereotypes,” sophomore Sophie Mack said. “I realized that all of the faiths we have learned about and the people within them are actually way more similar that I had thought.”

Both students and teachers have expressed intrigue for the upcoming presentations and look forward to what new ideas will be shared, according to McMichael.