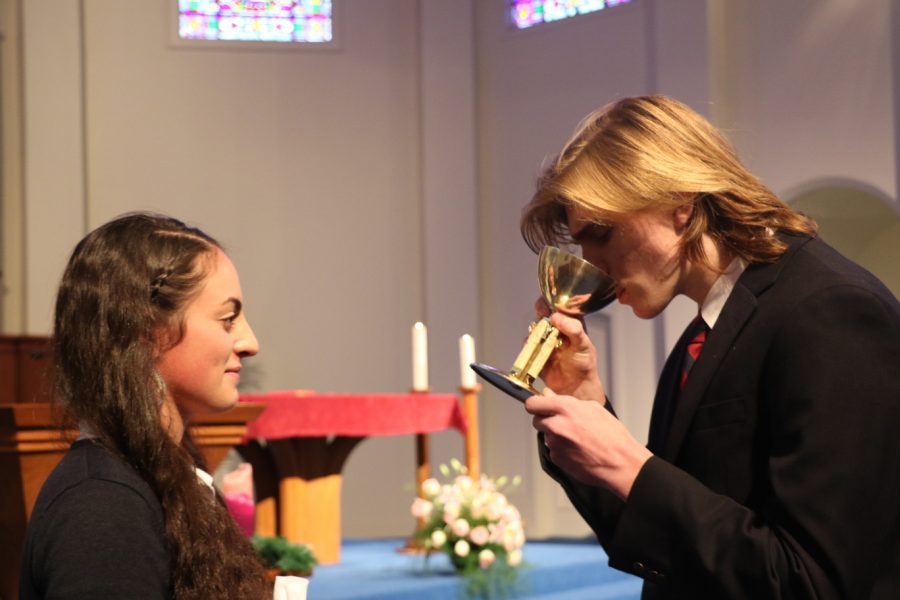 Senior Bella Kearney looks on as sophomore Jack Honeyman drinks from a chalice. When Catholics elect to receive the cup, it symbolizes sharing the cup that Jesus Christ drank from at the Last Supper.

Convent and Stuart Hall student bodies came together today at  St. Vincent de Paul Church to celebrate the feast of the Immaculate Conception.

Senior Bella Kearney led the congregation, explaining each part of the Mass as it occurred.

“I chose to lead the Mass because during my four years at Convent I have struggled with seeing everybody try their best to understand the Mass, due to the fact that no one thoroughly  explained what was going on,” Kearney said. “I thought that by explaining it  would be a much more tangible way to understand it.”

Some students called the narration helpful, citing the clarification as a nice touch.

“I liked how they explained everything about the Immaculate Conception so that people who aren’t Catholic could understand everything that was going on,” junior Jasper Conacher said.

Some freshmen are unfamiliar with the structure of Mass, so Kearney explained each component and the meanings behind each while they happened, according to freshman Caroline Thompson.

“I hope that it became more meaningful to them because now they might be able to understand the ritual as a whole,” Kearney said.