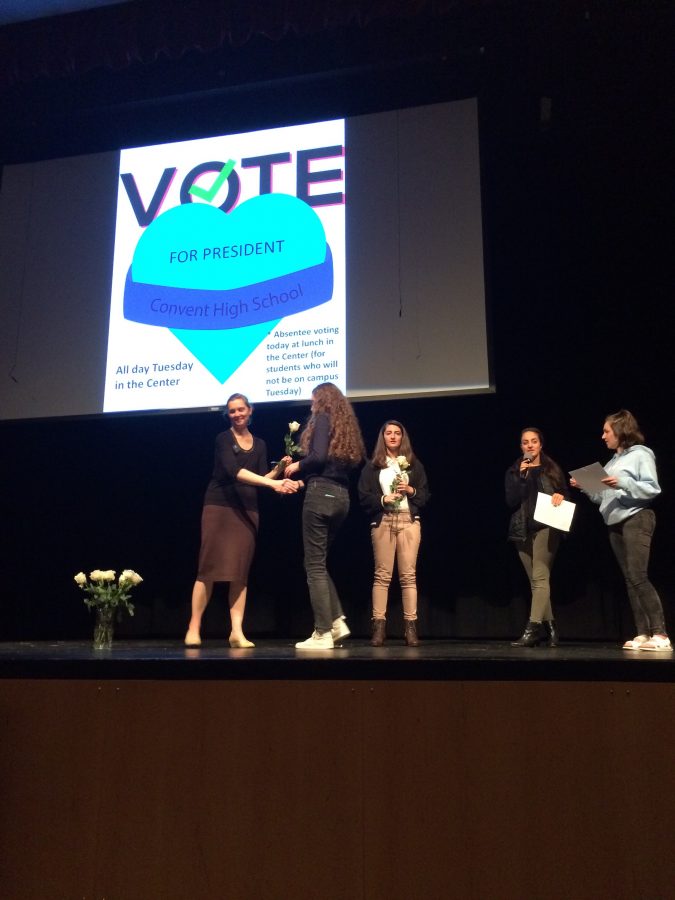 Recognition of the democratic process’ importance, the exploration of voting rights throughout American history, and explanation of certain ballot measures were primary themes of today’s assembly, “Celebrating Democracy.”

“I wanted to put something together that centered around student voice,” Sarah Garlinghouse, who organized the assembly, said. “The assembly was inspired to counter some of the negative energy surrounding this election, and instead promote the celebration of democracy and the 19th amendment.”

Beginning with an Espacio about the Standing Rock water protectors; including song, poetry, video, a some Hamilton and a mock vote; and ending with a school-sung rendition of ‘This Land is Your Land,’ the assembly focused on topics other than the presidential election.

“I read a Langston Hughes poem, [‘Let America Be America Again’],” junior Mary Crawford said. “The poem basically talked about the flaws of America and said that we need to make America a country that is actually for everyone. I think in this election that’s really one of the big questions we’re facing — is America for everyone?”

Seniors who will be voting tomorrow for the first time received white roses, and earned recognition from the student body for fulfilling their civic duty.

“Even if you weren’t a senior, this assembly was still important,” junior Trinity Lee said. “I’m not of age to vote yet, but I am working at the polls tomorrow and it’s my future, even though I don’t get a say in it right now.”

Videos explaining the history of voting in the United States and illustrating key points of the women’s suffrage movement were also shown, in efforts to expand the community’s understanding of the power and pertinence of the vote, according to Garlinghouse.

Additionally, both Convent & Stuart Hall High School students will have the opportunity to vote for president in a mock election and wear red, white and blue casual dress tomorrow in recognition of Election Day.

“No matter what happens tomorrow, the level of anxiety that this election has created is unprecedented as well as unhealthy,” Garlinghouse said. “On Wednesday, we should be ready to support whomever is elected and just move on.”

Note: The Broadview will be covering live election updates tomorrow. To that end, the Editorial Board has decided not to endorse specific presidential candidates in order to be able to provide ethical, non-partisan reporting of the political proceedings.