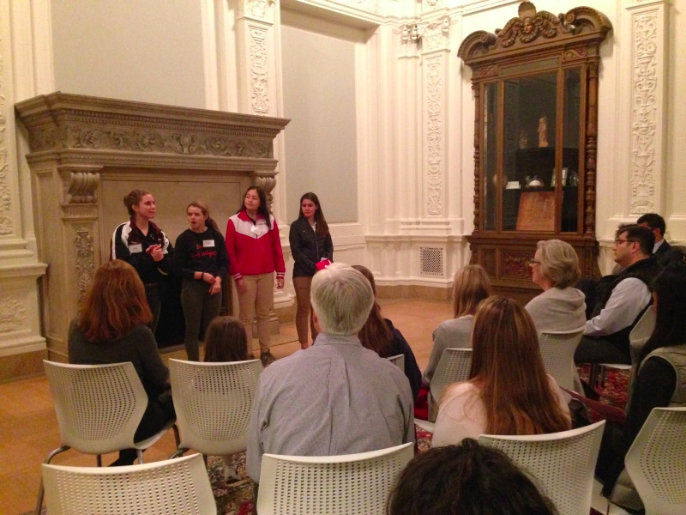 Athletes from various sports teams speak to prospective families at an open house panel. The school hosted approximately 150 families at the event.

Seventh and eighth graders visited the Broadway campus tonight for this fall’s last Open House for prospective students and their parents.

Admissions Director Allyson Maebert organized the event that she began planning  at the end of August.

“Open House serves an opportunity for families and students to know more about Convent besides what they know already,” Maebert said. “[It is] an opportunity to meet faculty and students and get [visitors] excited about the possibility of joining us for the next four years.”

Freshman Arianna Nassiri, who was one of the student guides, said she remembers attending Open House last year as an eighth grader.

“I saw two classes that I was interested in, math and biology with Mr. [Jordan] Lewis and Mrs. [Marisa] Orso,” Nassiri said. “Both were really amazing, super interactive, and you got to see how the teacher would teach the class.”

Student Body President Katie Newbold was a shadow host her freshman year and now acts as an admissions ambassador.

“I [gave] a speech to the parents at the beginning of the evening,” Newbold said. “Then I also [talked] about athletics.”

The agenda for the Open House had been set, but a few finishing touches needed to be made to make the night run smoothly, according to Maebert.

“The only thing left to do was to add signage about room numbers for the different classes, but the balloons came at four, and other than that we were ready to have a good old time,” Maebert said.