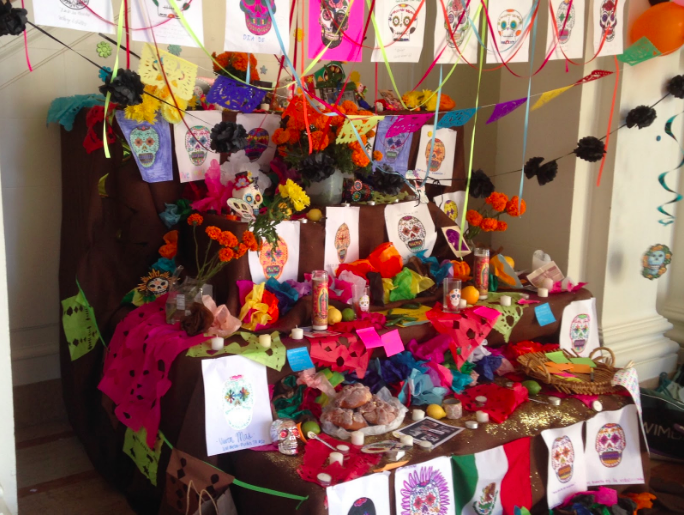 A Day of the Dead altar made by Convent Elementary students stands in the Main Hall commemorating those who have died. Others wrote down the names of those they would like to honor on a sticky note and placed it on the altar.

Spanish classes learned about Mexican culture and Day of the Dead, or Día de los Muertos, while others used the holiday as a time to pay tribute to friends and family who have died.

Day of the Dead is a Mexican holiday celebrated to honor those who have died and is often celebrated with parades, processions, and altars.

Teachers Mary Bicanic and Ricky Garcia took their Spanish 3 Honors class on a field trip to the Mission District this weekend to experience Day of the Dead festivities.

“We visited the Mission Cultural Center for Latino Arts and saw the Day of the Dead art exhibition which included ofrendas—day of the dead altars—and a photograph series,” Bicanic said. “We also got to walk around the neighborhood viewing the murals.”

Other students, such as sophomore Isabella Bermejo, celebrated Day of the Dead at home with their families commemorating the loved ones who’ve died.

“We lit candles especially for my grandfather who passed away 5 years ago,” Bermejo said, “So we put up his picture with some flowers and pictures of other family members who passed away, and light candles for them.”

Freshman Malinalli Cervantes celebrates with her family every year by having a small altar to honor her ancestors, making and decorating chocolate and sugar skulls, and going to special events with her family.

Day of the Dead is celebrated on the same day as the Christian holiday All Souls Day — both have similar purposes of remembering the dead and honoring their lives.

“I grew up celebrating [Day of the Dead] in the Catholic tradition, but now, I enjoy the more vibrant colorful whimsical way that this holiday is recognized,” Bicanic said.