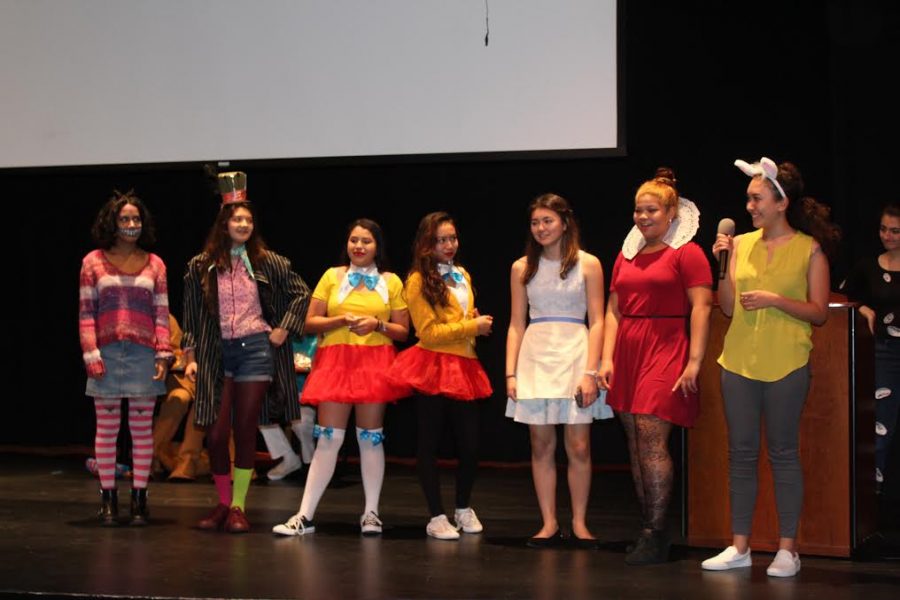 Freshmen dressed as “Alice’s Adventures in Wonderland” and explaining their costumes. The group, which won first place, had been coordinating individual costumes for weeks.

Students and faculty gathered in Syufy Theatre for a Halloween-themed assembly to show off their costumes, compete for best outfits and join in some holiday fun.

Jim Halpert from “The Office,” Ms. Frizzle and Nickelback all made appearances in the faculty contest, but math teacher Jordan Lewis, proved victorious with his Halpert costume.

“I had some circles on my shirt, and that was 3 hole punch Jim, a costume [the character] had one year,” Lewis said. “I also had a stapler in Jell-O which is a prank that Jim pulled on Dwight in the first episode of ‘The Office’.”

Although the students who won best group costume for their portrayal of “Alice’s Adventures in Wonderland,” said they took weeks to plan what they were going to wear, some students like sophomore Bianca Mercado, plan their costumes at the last minute.

“I came up with this [scarecrow] outfit at one in the morning,” Mercado said. “I had all the clothes already in my closet.”

Wearing costumes to school allows students to enjoy the holiday, even with Halloween falling on a Monday, according to Lewis.