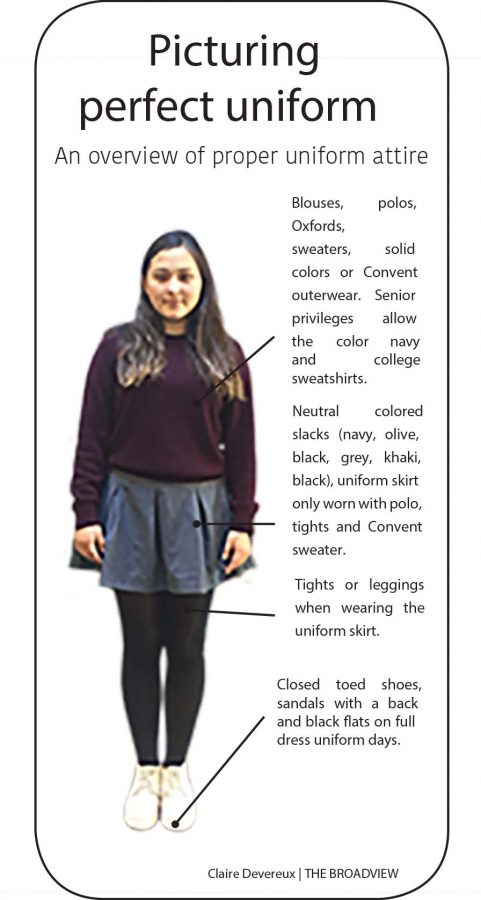 While coming to school in sweatpants and a T-shirt everyday can be comfortable, studies show that “dressing for success” may prove beneficial for learning.

Wearing more formal attire, such as dress pants, blouses and blazers, increases higher level thinking and feelings of power, according to a study published in Social Psychological & Personality Science, conducted by researchers from Columbia University and California State University, Northridge who asked subjects to wear either casual or formal clothing before a test.

The current Convent & Stuart Hall Student/Parent High School Handbook includes an updated dress code as an expansion of the school uniform, yet the school has not abandoned maintaining a look reflecting dressing for success, according to Director of Student Life Devin DeMartini Cooke.

“There’s an important balance between being physically comfortable and looking prepared for whatever activity it is you’re going to,” DeMartini Cooke said. “I want you to feel ready for the school day.”

A dress code offers a balance between a strict uniform and having infinite wardrobe options while still offering school appropriate clothes, according to DeMartini Cooke.

“It’s about how we dress in a way that gives us time to perform the job we’re doing and also think less about what we’re wearing,” Head of School Rachel Simpson said. “Then, we can pay more attention to what we’re doing.”

The dress code not only conveys dressing for success, but also strives to have unisex options, such as pants and polos, for both Convent and Stuart Hall high school students, according to Simpson.

“The uniform gives us the ability to express ourselves and be comfortable at the same time,” junior Ariana Davidis said. “They’ve definitely made it more unisex with the addition of pants.”

DeMartini Cooke announced the addition of bermuda shorts to the dress code last Friday at assembly. Shorts were previously the only item of dress code that was permitted for only Stuart Hall students.

“We never want it to be a potential double standard,” Simpson said about aligning the code with Stuart Hall High School. “We have tried to establish some form of gender neutrality in the dress code.”

The decision to add a dress code option in lieu of the uniform on most school days resulted from a discussion group comprised of students who reevaluated the uniform last year. Every student was invited to be apart of the group, according to Simpson.

“Faculty and students talked about the reality and practicality of the uniform and what was working and what wasn’t,” Junior Class President Fiona Mittelstaedt, who was apart of the discussion group, said. “We wanted a look that was put together so we are ready to learn.”

Keeping a uniform option respects the school’s tradition of having coordinated attire to be apart of a community, according to DeMartini Cooke.

“We want students to wear dress uniform for Masses and special events to really communicate uniformity,” DeMartini Cooke said. “We are showing pride and respect for the community we are coming from, instead of doing it ‘just ’cause.’”