Day of the Dead exhibit reflects on the past 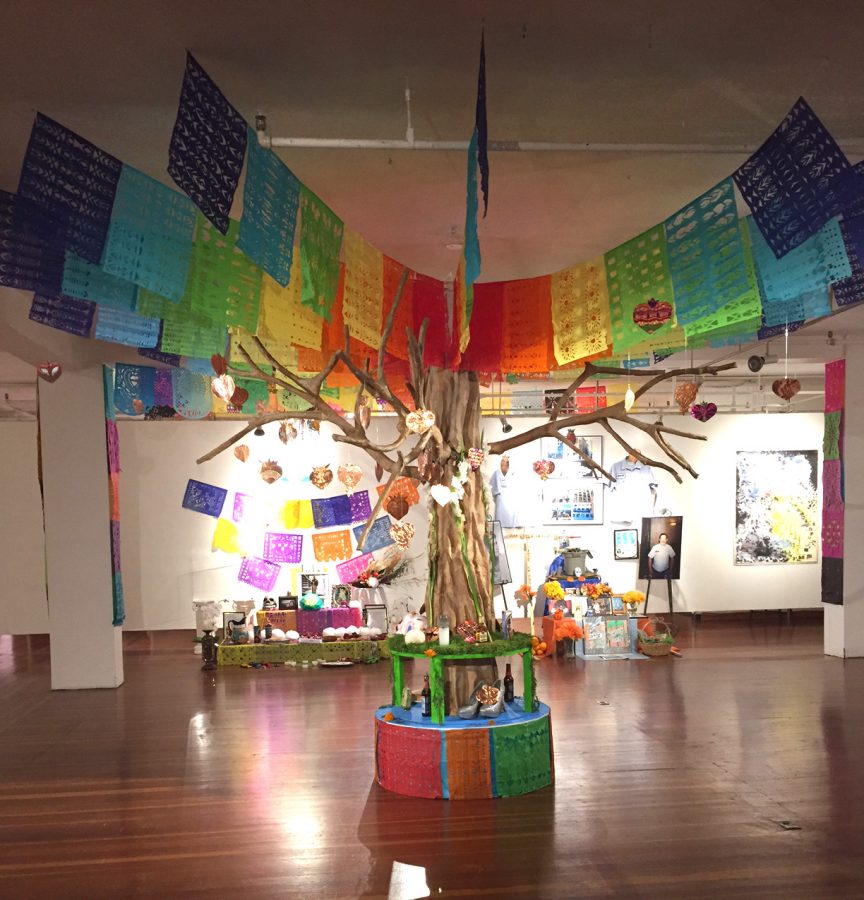 An altar for the victims of the Orlando Shooting is on display at the Mission Cultural Center for Latino Arts. The altar was created in house.

A large tree with 49 copper hearts and rainbow “papel picado,” paper cut into elaborate designs, stands in the center of the Mission Cultural Center gallery for Latino Arts 30th annual Day of the Dead exhibition to honor the Orlando Shooting victims.

“Día de los Muertos,” a multi-day celebration around Nov. 2 as All Soul’s Day, recognizes the cycle of life and death by creating an altar or “ofrenda.” The day is also commemorated with food, drinks and activities, all of which the deceased may have enjoyed doing during their lives.

“The way that people encompass and prepare for the ritual stems from that natural calendar cycle of the environment,” Angelica Rodriguez, Gallery Coordinator for the Day of the Dead exhibition, said. “People would tend to start gathering the last of the harvest and take the opportunity to remember all the people and things that were here before, that are no longer here.”

Annual exhibit themes can reflect what is going on in the world politically and socially. This year’s Cultural Center exhibit includes altars honoring victims of police shootings and a prominent Mexican artist, while featuring art from 13 different artists.

This year’s theme, “Ofrendas para las ánimas. Offerings for the souls,” focuses on the origins of the celebration, according to Rodriguez.

“Last year’s exhibit’s theme was on Junípero Serra and the controversy of him being canonized as a saint because there was protest due to his treatment of the indigenous people,” Spanish teacher Mary Bicanic said. “I thought that was really important to focus on in terms of an interdisciplinary lesson, by studying it in American history, art history and the Spanish class.”

“It can be so specific to each family,” senior Grace Apple, who visited the exhibition, said. “They put things on the altar that only they attribute with their honoree like a deck of cards, board games or different drinks they liked.”

Two thousand guests and up to 55 schools typically visit the exhibition, according to Rodriguez.

“The Mission as a neighborhood itself is a great classroom for Spanish students because of the many cultural benefits as well as linguists,” Bicanic said. “San Francisco is one of the cities in the U.S. that widely celebrates Day of the Dead because of the Mexican-American population and heritage.”

“Ofrendas para las ánimas. Offerings for the souls.” runs through Nov. 19 at the Mission Cultural Center for Latino Arts, at 2862 Mission St. Gallery. Hours are Tuesday through Saturday, 10 a.m. to 5 p.m. Admission is $2.