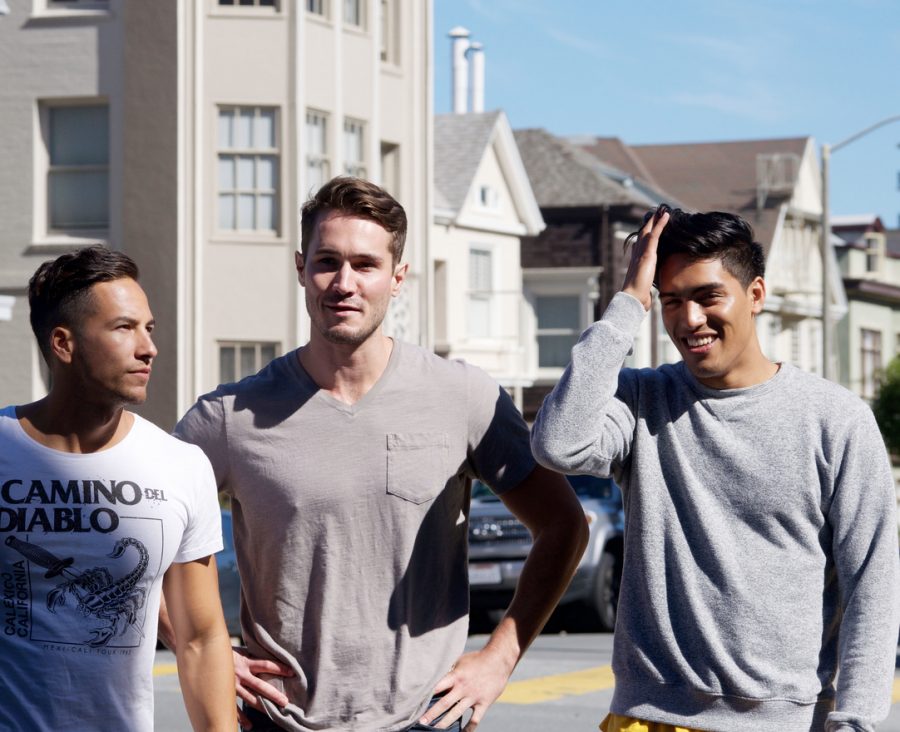 Three Asics models pose for the camera on the corner of Vallejo street. The crew shot all morning and wrapped up just after lunch.

Photographers and models from all over the world crowded Vallejo Street today just below the Siboni Center for Arts and Sciences to take part in a photo shoot for Asics sportswear.

“[Vallejo] has a good sidewalk and those really steep stairs, so [we] are at this location for the interesting perspectives,” production coordinator Racheal Olmstead said.

As part of a seven-day shoot, the crew and photographers will travel around the Bay Area to shoot still images and B-roll production, or behind-the-scenes videos.

“The big rolling hills are a bit of an icon in San Francisco, so that’s why we chose it,” photographer Paul Calver said. “A lot of the shots are about fast running, so the perspective of the street helps accentuate that in the image.”

People came together from all over the globe to help perform the seven-day photoshoot, according to Olmstead.

“This is a really interesting job because it’s a very international crew,” Olmstead said. “The photographer and all of his assistants are here from London, and there are [people from] all the different regions that the brand represents — Japan, Europe, Los Angeles — it’s a big coordinated effort.”

The models wore new clothing from Asics, which is set to come out in about a year or so, according to model Michael Gabel.

“We wear the clothes and the shoes that the brand provides and we model them in active, lifestyle poses throughout the week,” Gabel said. “I thought this was a cool opportunity to travel and work somewhere really awesome, see some places I’ve never been before, and get paid to be active. What’s better than that?”