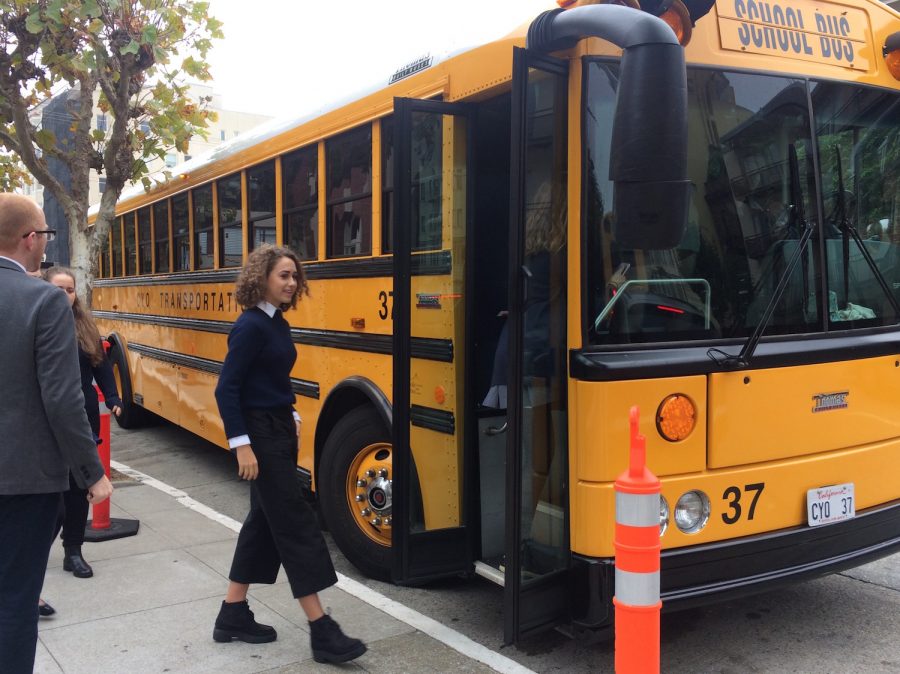 Senior Elisa Ternynck boards the bus to Cathedral of Saint Mary of the Assumption, the location of the annual Mass of the Holy Spirit. Bystanders outside of the church watched the Senior Class as they proceeded into the church last as per tradition.

The blessing of the school year presented a gender neutral dress uniform option and a much shorter travel time for students, ushering changes to an annual tradition.

Student Life Director Devin DeMartini Cooke announced the new option of allowing students to wear black slacks as a substitution for the traditional tights and grey skirt over a mass email the night before the four school Mass of the Holy Spirit.

“When we’re looking at uniformity between Convent and Stuart Hall, the girls should have the same types of options,” Cooke said. “Not everybody wants to wear the skirt for dress uniform and letting girls have that option really felt important.”

The new uniform guidelines, created in the Convent and Stuart Hall Student/Parent High School Handbook, also served as a great way of fighting the city’s cold and foggy weather, according to senior Sarah Hong.

“I’m freezing out here so wearing a skirt and tights didn’t seem like the best option for keeping me warm,” Hong said. “I love how they made pants an option.”

Grade-level transportation may have also helped students fight the cold as well as save time.

“Sometimes people didn’t know what they were doing or where they were going,” senior Maya Shur said. “Having a bus was just a nice and concentrated way of getting everyone from point A to point B in a much more organized way.”

The changes created a more streamlined and homogenous process, according to Cooke.

“We wanted to show respect for time as well as find uniformity between Convent and Stuart Hall,” Cooke said. “It all just seemed like things we should be doing.”