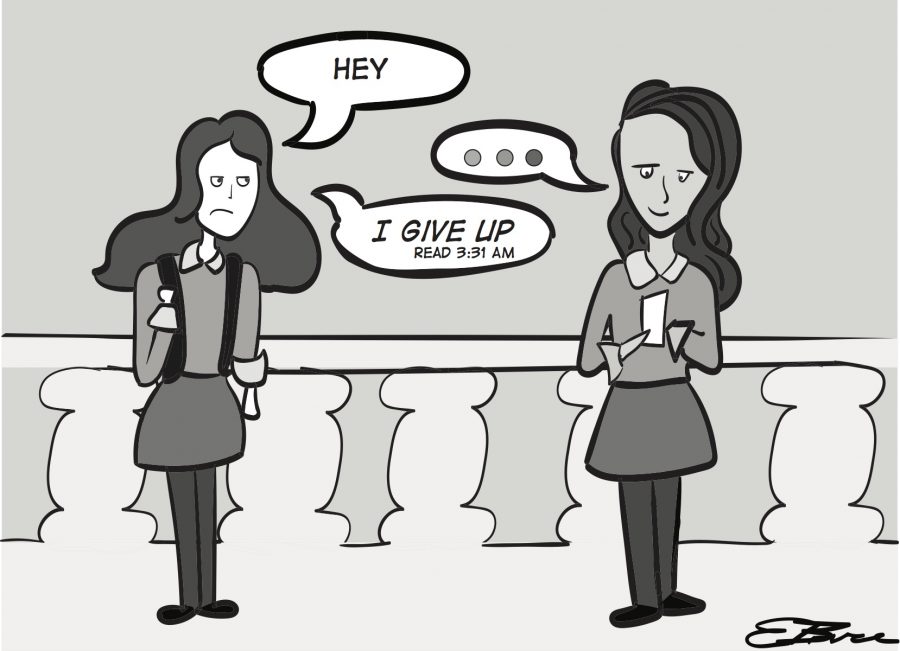 While lunch provides a time for peers to chat together before resuming their afternoon classes, many students spend the break constantly checking their phones rather than focusing on the friends around them.

With the avid popularity of social media, teens can feel left out by seeing updates of events or activities across their newsfeeds that they are not participating in. The fear of missing out, prominent among teens, can directly correspond with an addiction to social media applications, referred to as “social media reversion” in a 2015 Cornell University study.

Apps like Instagram and Facebook put a large focus on users’ notifications which can leave many teens feeling pressured to gain as many likes and followers as possible instead of simply enjoying the content of the app’s users.

To test the affect social media has on the brain, 32 teens were confronted with social media and scanned using a functional magnetic resonance imaging scanner to gauge the reactions of the brain to the stimuli, in a study conducted by University of California, Los Angeles. When a teen’s photo was “liked” numerous times, the same part of the brain that responds to seeing a person the subject loved or winning a significant prize was stimulated.

Scrolling through one’s own Instagram feed often reveals perfectly-posed pictures showing users at their best rather than with the imperfections of reality. With the help of editing apps, good lighting and ideal timing, these illusions of perfection set unattainable expectations for people to mimic in reality.

This mindset creates an unhealthy obsession with one’s online popularity and image of perfection, even if one’s representation online fails to reflect in reality.

Some students go to extreme measures to display the appearance of virtual popularity in order to improve their online images. Rather than portraying an accurate picture of their social life online, teens may resort to buying likes and followers to maintain their online persona, spreading an unhealthy social expectation that students feel obligated to abide by.

Constant use of one’s phone can drive others away from pursuing social interaction, seeing chronic phone use as a sign of not wanting friendly attention.

As a result, social media and other forms of online communication can become a replacement for real life interaction, lessening the value and reality of their personal connections.

To put it simply, put your phone away when socializing with friends.

In order to maintain relationships both online and in real life, it’s important to find a healthy balance between our virtual life and reality, creating equilibrium between both ends of the social spectrum.

If we don’t, new followers and like for likes will replace authentic social connections, making social media a much more anti-social reality.