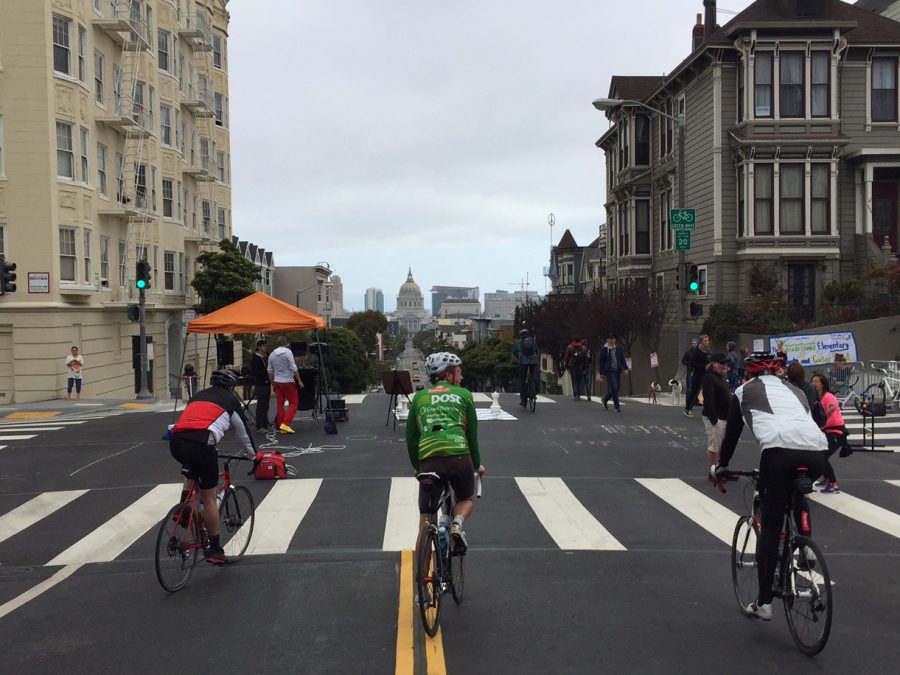 Three bikers ride down Fulton Street, a car-free area of the Western Addition Sunday Streets. The concept of closing streets to vehicles to create outdoor neighborhood markets started in Bogotá, Columbia and has spread to cities spanning around the globe.

Sunday Streets — a monthly event taking place during the spring and fall months — blocks off several consecutive blocks to allow families and friends to walk, bike and run at leisure through neighborhoods such as the Western Addition, Mission and Embarcadero.

Originating as a community-building event, Sunday Streets gives license to roam freely on blocked off streets of hosting San Francisco neighborhoods that residents might otherwise be unlikely to visit.

“Sunday Streets brings the neighborhood together,” District 5 Supervisor London Breed, who represents the Western Addition, Lower Fillmore, Alamo Square and North of the Panhandle areas where the Sept. 11 event took place, said. “There are people here not just from this neighborhood but from everywhere — people who traditionally would not approach one another have the opportunity to do so.”

Experiences vary depending on the hosting neighborhood, and each weekend is different.

“The difference is in the communities that come out for Sunday Streets, for example we have a lot of historical African American institutions and businesses on Fillmore,” Birnbaum said. “There’s a lot of housing in the area that serves Section 8 low income, so we try to serve those communities as well.”

Outside vendors are prohibited so that local contributors and businesses reap the benefits that come with an influx of visitors. Restaurants like Wise Sons Bagel and Bakery on 1520 Fillmore St. had standing room only for customers waiting for orders.

“I think that it’s good for businesses that are open because people who probably would never walk into a particular business would,” Breed said. “Since they are in the neighborhood and it might be the only business open they might go in.”

While not all businesses were active in the Western Addition section, merchants like Book Mobile a public library on wheels, SF Rec and Park, radio stations and nonprofits to promote help their services.

“We are creating a moment and space for people to come together and learn about their neighborhood and find different resources they can tap into,” Birnbaum said.

Part of Sunday Streets’ goal is to create new open space and recreational opportunities which they accomplished by gathering neighborhood natives and outsiders according to Birnbaum.

The last two Sunday Streets events are Oct. 16 in the Excelsior and Nov. 13 in the Embarcadero. The event runs 11 a.m. to 4 p.m., and admission is free.