School archives to be reorganized, uploaded into online database. 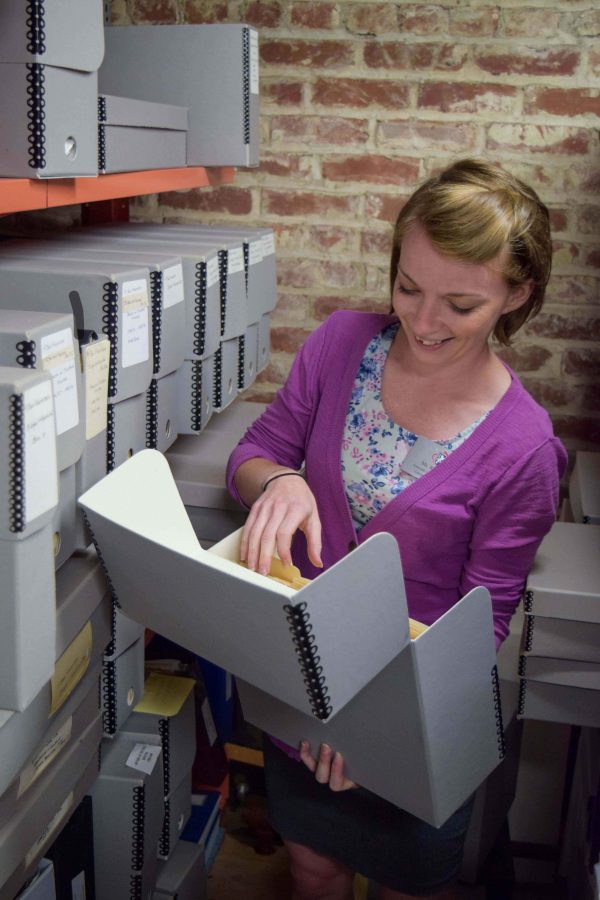 Associate Librarian Reba Sell sorts through documents in the Archives in the Grant House attic. The Archives contain historical documents and old yearbooks.

Old uniform pictures and architectural blueprints of the Flood Mansion, previously hidden away in the attic of the Grant House, will become accessible by computer as the Archives are digitized.

“Just think school history and we have it,” Associate Librarian Reba Sell said. “Whether it’s business records or student photographs.”

The Archives will be moving from the attic of the Grant House to the back room in the Mother Williams Library. Librarians will scan documents and upload them onto a database where students can view them. Former Director of Schools Sister Mary Mardel, RSCJ was at the Broadway campus on April 13 and 14 working with alumna Virginia Murillo (’48) to identify and organize the Archives.

“Any organization has archives,” Mardel said. “They’re very important, because all the records, all the accounts of everything that goes on in the school are kept there.”

Mardel and Murillo used a timeline starting in 1887 to categorize photos and other objects found in the Archives.

“The school reacts to the historic events that are happening in the world,” Murillo said. “During World War II, we looked out these windows and we could see our battleships leaving and coming back. This school is part of the history of San Francisco.”

Sell plans to digitize all of the archival documents with the help of Lead Librarian Alyson Barrett-Ryan.

“All the different departments have their own section and the history of all the departments are there,” Murillo said.

Sell says she hopes to have students help out with the digitalization, read through the primary sources and look for additional information about what students would be scanning.

“It’s a huge project we’re undertaking,” Sell said. “The digitalization will be an ongoing process. As we continue to get more documents, we’ll just keep scanning them.”

Sell plans on using a flatbed scanner to get high resolution images of the documents.

“Students could use it for community research, even just to look back on local history here during World War II,” Sell said. “It’s just another way to look at history but at a local, in depth analysis of it.”