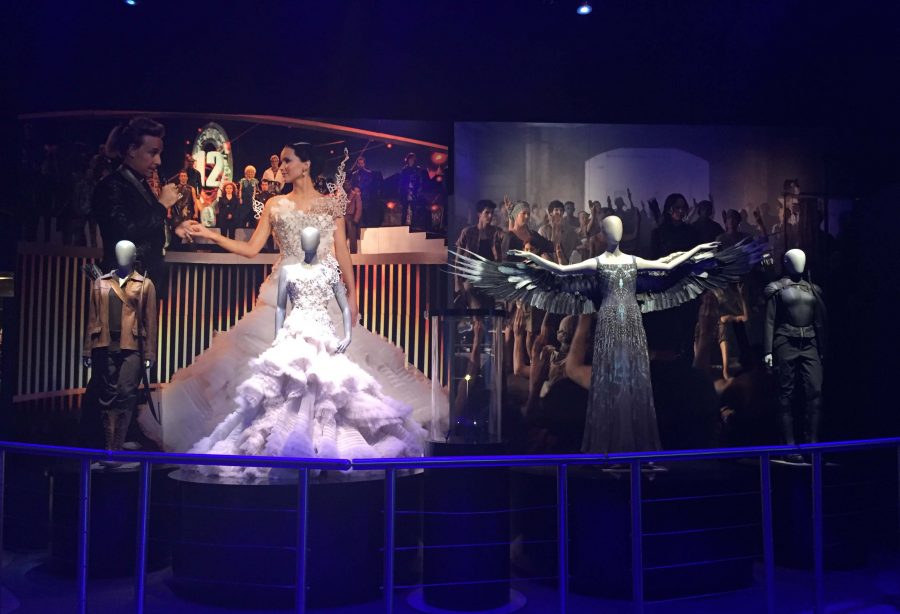 Katniss Everdeen is highlighted through a series of costumes in the final room of "The Hunger Games: The Exhibition." Six exhibit rooms showcase some of her most popular outfits.

“The Hunger Games” saga has come to an end but, through actual costumes and props from the movies in an interactive setting, the series has been resurrected at the Palace of Fine Arts so fans can give a final farewell.

The movie series illustrates the conflict of each “district,” or state, in the dystopian world of “The Hunger Games,”  involuntarily sacrificing two children — one girl and one boy — as “tributes” in an Olympian battle where the losers are punished with death for the Capitol’s entertainment. The series’ heroine Katniss Everdeen, played by Jennifer Lawrence, volunteers as tribute to save her sister and becomes the series’ protagonist — winning the games alongside her love interest Peeta Mellark (Josh Hutcherson).

The first rooms of the exhibit depict the natural elements of Everdeen’s home, District 12, as guests first walk into an eerie brown room containing what is supposed to be the Hob, a black market trading center, followed by a green room containing Everdeen’s early costumes from forest scenes.

The exhibit transitions District 12 to the Capitol Train Room — used to transport tributes from all participating districts to the Capitol, the government’s headquarters. Despite an intricate blue dress worn by the District 12 tribute escort Effie Trinket, the room lacked impressive details to bring the scenes to life — using only a train bench and smeared images to depict the moving train.

Mannequins dressed in some of  President Snow’s, the leader of Panem, costumes as they move into the Capitol Rooms. While there is a wide range of interactive activities throughout the rooms, they lack dramatic appeal to impress fans. Guests sit face-to-face with a mannequin as a projection of the character’s face stares blankly, in an interview simulation with the television host of “The Hunger Games” Caesar Flickerman.

Viewers proceed to the Making of The Games — a room where they can learn fighting techniques and knot tying, referencing the famous scenes as the characters prepare for the arena. To learn the fighting techniques, participants step up on a platform and follow along with a trainer on a screen. Costumes and weapons used by tributes Rue from District 11 and Joanna from District 7 are also on display.

The exhibit concludes with District 13 and Katniss’ Journey. Despite the lack of interactive activities or costumes in these rooms, guests experience what it would be like to live underground in demolished District 13. Katniss’ Journey wraps up the exhibit with some of her most provocative costumes. The final stop contains her most iconic outfits and jewelry, including her Mockingjay pin which she wore in the games as a symbol of hope.

Although signage in the rooms informs guests of the meaning behind the series scenes, they failed to bring “The Hunger Games” to life. The exhibit is a more kid-friendly way to experience the series.