Classes of 2020 meet for the first time 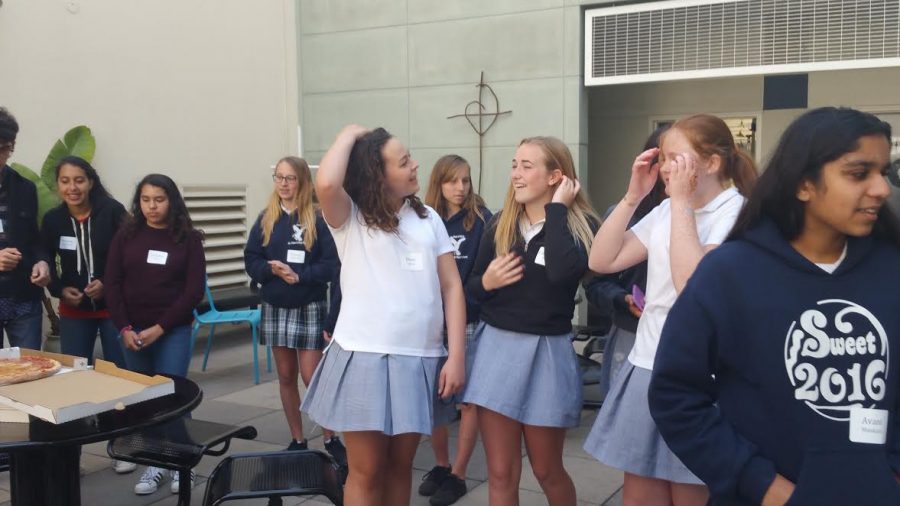 Incoming freshmen joke with each other in the Stuart Hall High School courtyard. Both schools student councils organized icebreakers such as "jukebox" where students were separated into four different groups and had to think of different songs with a key word in common without repeating the the previous ones sung.

The student councils at both high schools greeted incoming freshmen at the annual Ice Cream Social held at Stuart Hall High School — the first time both classes of 2020 met each other.

“I think of myself sometimes as an introvert but this allowed me to talk to people I probably wouldn’t talk to on my own,” incoming freshman Malinalli Cervantes said.  “Here, you get to see how people are, if just a glimpse of it, which was really cool. I got to meet other people and see how people are when they’re loose and relaxed.”

The hour was filled with laughter and hardly any awkward silences as ice breakers allowed students to become more comfortable with one another.

Parents discussed the next school year with Allyson Maebert, Admissions Director of Convent of the Sacred Heart and Jen Butler, Enrollment Management Director of all four schools.

“Everyone’s getting along and talking to someone which is fantastic since the ice cream social is just a nice ice breaker,” Maebert said. “It’s for figuring out who you know and who you don’t know and trying to figure out who’re going to be your future classmates before fall.”

“I just wanted to get to know the incoming freshmen and try to make some meaningful connections with them to make them more familiar with this school and its surroundings,” sophomore Jocelyn Shilakes, a drop-in volunteer, said. “I’ve talked with a few of them and they seem very excited about what’s to come in high school.”

Attendees celebrated their admissions decisions with ice cream sandwiches and fruit ppsicles as they left the building.

“I already know some people who are already coming here and now I know more people,” incoming freshman Kai Johnson said “I like the people around me which probably means I’ll like this environment.”